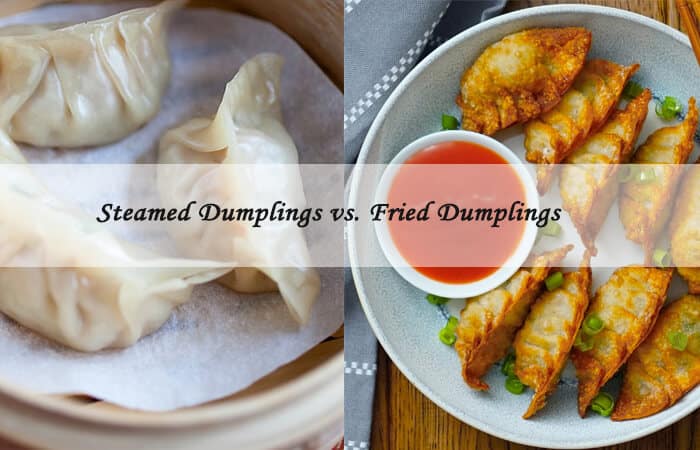 The ultimate comfort meal, adored in a wide variety of cuisines around the world, dumplings come in a huge variety of shapes, sizes, and variations.

Dumplings can be made in two of the most popular ways: frying or steaming.

You may guess what the distinctions between steamed and fried dumplings are.

Although, steamed and fried dumpling construction is essentially identical. The main distinction is that fried dumplings are seared in a skillet, while the other is prepared in a steamer.

Continue reading to learn more about the differences between steamed and fried versions, which are typically healthier, and much more.

Learn About Steamed And Fried Dumplings

A dumpling is a mound or small pile of soft dough that is made into and frequently rolled out to enclose a filling before being fried.

They are most commonly associated with Asian cuisines, primarily those from China, Japan, Korea, and Vietnam, and have gained enormous popularity all over the world.

Dumplings often referred to as jiaozi in Chinese and gyoza in Japanese can be both savory and sweet and can be made in a variety of ways.

The filling is entirely determined by the dumpling. Prevalent fillings are pork and scallions. Everyone has a choice with dumplings because they can be filled with meat, chicken, or vegetables.

The dumplings must be cooked, which can be either fried or steamed, after being crammed and squashed together.

Differences Between Steamed And Fried Dumplings

Steamed dumplings and fried dumplings are made quite similarly. However, they do have some differences. Let’s take a look at them. 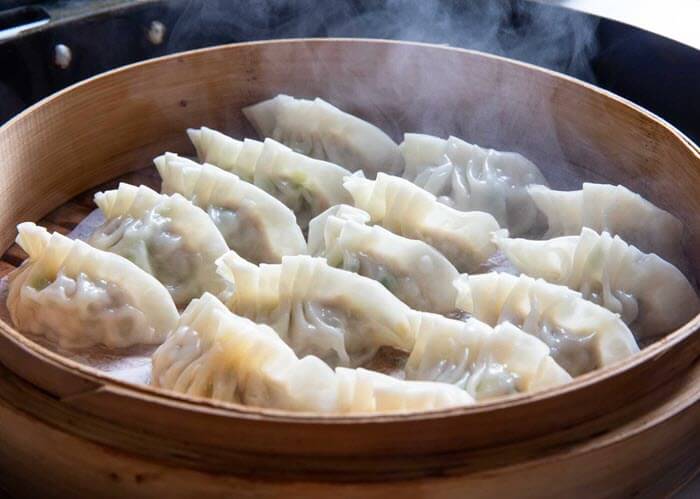 Using a steamer, steaming dumplings just requires ten to fifteen minutes. A skillet with the required water to cook the dumplings is used. The dumpling then turns soft, chewy, and shiny after that.

A pan must be used to fry the dumplings to create fried dumplings. After adding the oil, the dumplings must be fried for around 10 minutes.

On one side, the fried dumplings’ crunchy surface is visible. In direct contrast to this is the interior stuffing, which is soft. Fried dumplings are known as potstickers.

You can select steamed or fried dumplings according to your liking. 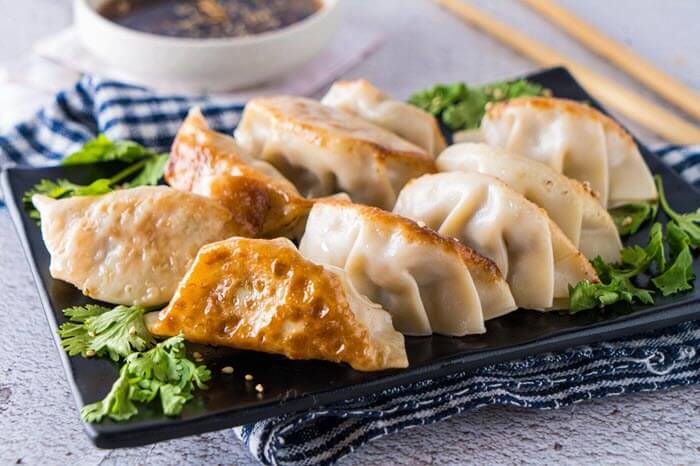 Dumplings can be steamed or fried, and the only difference is the skin, which can be either crispy or soft depending on your desire.

Fried dumplings are crispier whereas steamed ones are soft.

Dumplings that have already been cooked can be stored in the refrigerator for a few days, but they must be refried or they will lose their crunch. They should be served warm and with your preferred dipping sauce.

Both types of dumplings are typically extremely nutritious as they have a lot of whole ingredients offering various vitamins. But, remember dumplings also contain carbs and fat which account for most of their calories.

Steamed dumplings are the undisputed champion in terms of healthiness because they use less oil than fried dumplings.

Since oil is used to prepare fried dumplings, they contain more fat than their steamed counterparts. The quality of the filling can also affect how wholesome and nourishing the dumpling is, in addition to the cooking technique.

Lean meats are an excellent option for a low-fat cuisine; therefore your choice of meat will be a major deciding element.

The amount of vegetables also affects how many vitamins and minerals you are getting, in addition to the type and quality of the meat.

Can You Air Fry Dumplings?

You’re missing out if you’ve never tried air-frying dumplings! An air fryer is a fantastic tool for delectably crisping up frozen dumplings.

If you have an air fryer, you must try this recipe for air fry dumplings, also known as mandu, gyoza, wontons, or potstickers. Dumplings made from frozen turn out crispy and delectable!

So, do you have access to an air fryer? If yes, congratulate yourself on getting to experience it.

The use of air fryers is a fantastic way to create “fried” foods that are crispy, crunchy, and free of the fat and oil used in conventional frying. As previously stated, the decision between fried and steamed dumplings is mostly a matter of preference.

So, individuals who adore fried dumplings will enjoy these air fry dumplings.

Can You Deep Fry Dumplings?

You can use a nonstick pan for deep frying and heat it to temperature over medium heat. The dumplings should be fried until the bottoms are golden brown.

Making dumplings with family and friends is fun and easy. They are a simple meal that is versatile in their foundation. They can be served with a variety of savory meals that take the dumplings to the next level or simply with a dipping sauce as a side.

The cooking method determines whether the entire food succeeds or fails. Steamed dumplings are traditional, simple to cook, and healthy, yet some individuals might find them to be bland.

However, fried dumplings are the most common; they have a crunchy texture but can’t be kept for very long after cooking.

Knowing the distinctions between the delectable steamed vs. fried dumplings can make you a better cook, enable you to explore many culinary types, and help you decide which is ideal for you and your family.

Home > Comparison > What’s the Difference Between Steamed and Fried Dumplings?
About Me