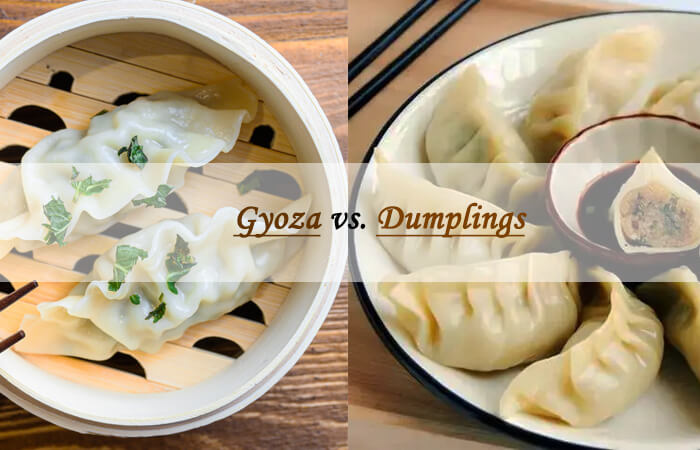 If you frequently enjoy dining at Chinese or Japanese restaurants, you may be familiar with their appetizers.

On some menus, you’ll see the word gyoza, while on others you’ll see dumplings.

Is there even a difference between gyoza and dumplings? Are dumplings Chinese or Japanese? What about potstickers, wontons, and Dim Sum? Who can keep them all straight?

Keep reading to find the answers you seek.

Gyoza is a Japanese dumpling, and Jiaozi is a Chinese dumpling. The Jiaozi are commonly referred to simply as dumplings.

The differences between gyoza and dumplings are their wrapper thickness, flavor, shape, and origin.

Both have a lot of variation in their shapes depending on preparation style. 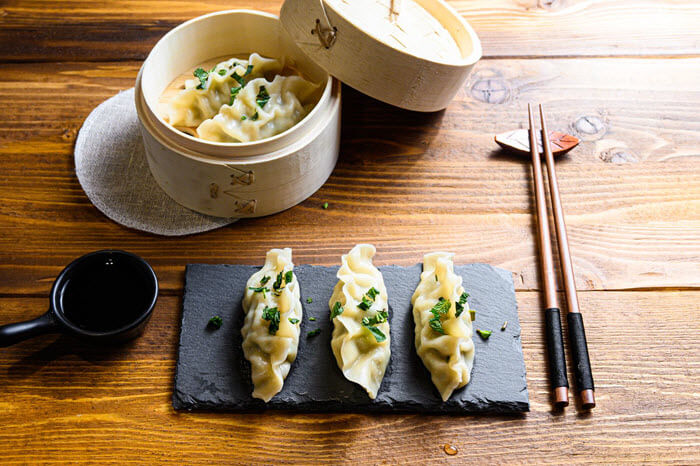 Gyoza, or Jiaozi, is a dish of Chinese origin, though it has spread to other parts of East Asia and the Western world.

Gyoza is a Japanese word that derives from the Chinese characters for the meal’s name.

If you didn’t know, the Japanese language uses three writing systems [1] as an alphabet.

One of those writing systems, Kanji, borrows many characters from Mandarin Chinese. That’s how a Japanese person reads the name without speaking Mandarin, and why you see the different spellings.

Gyoza vs Jiaozi – Facts About Jiaozi

Fact #1. Jiaozi is a Chinese dumpling. You make it from a thinly rolled dough that you stuff with ground meat and vegetables.

Fact #2. You can divide Jiaozi into categories depending on how it’s cooked: steamed, boiled, pan-fried, deep-fried, or in soup.

Fact #3. You can fill a Jiaozi with just about anything.

Fact #4. Typical fillings are beef, chicken, prawns, fish, pork, or mutton. You can mix those meats with vegetables such as cabbage, carrot, garlic, chives, celery, mushroom, spinach, and spring onions.

Fact #5. It’s all stuffed in a dough wrapper and cooked.

Gyoza vs Jiaozi – About Gyoza

Fact #1. Gyoza is the Japanese cousin of Jiaozi. Overall they’re more alike than different, but there are differences.

Fact #3. Jiaozi has also been around for thousands of years, while gyoza has only been in Japan since World War II. Japanese soldiers returned home and tried replicating the food they ate while abroad. 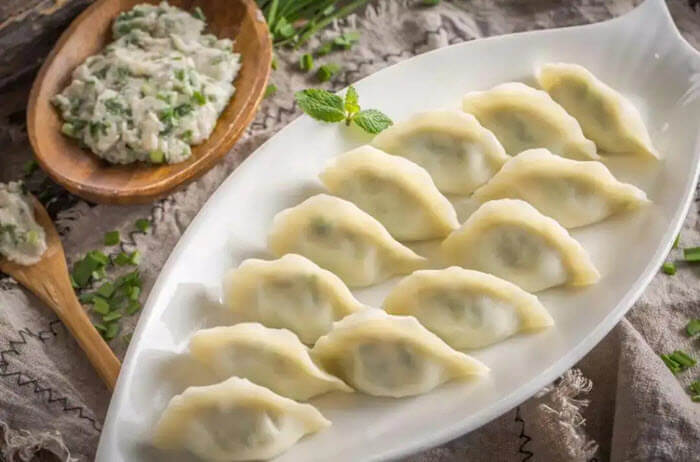 The oldest known recipes for dumplings come from a Roman cookbook called Apicius [2].

Chinese dumplings are assuredly older than Roman dumplings, but there’s no way to be sure how old.

He returned to his village during the winter and saw his people suffering from frostbite, especially around their ears.

He cooked up meat, veggies, and healing herbs and stuffed them into a dough.

He then allegedly shaped the dough to look like little ears and handed them out. The villagers loved them and continued to cook them long after.

If this recipe sounds familiar, it’s the same as the one for Jiaozi.

The concept of dumplings is widespread though, and almost every culture in the world has its version of dumplings. There are;

Differences Between Gyoza and Dumplings

If you think of dumplings as only being Chinese and gyoza as being Japanese, the differences between them are in their wrappers, flavor, shape, and age/origin.

You can find regional variation in the thickness of Chinese wrappers, but they usually are thicker than Japanese wrappers.

The main reason is that most gyoza is prepared with machine-made wrappers, whereas Jiaozi, or dumplings, are handmade.

Almost anything can go inside a dumpling or a gyoza, but there are some consistent differences in flavor.

The gyoza typically has a richer garlic taste than dumplings do. They’re both made in different countries, so even if you use the same ingredients, the flavors will vary.

Dumplings are usually horn-shaped or ear-shaped, if you believe the legend.

You’ll see the same variation in gyoza as well. The typical shape is a half-moon, but people will fold them into various creative shapes like a rose.

Dumplings are thousands of years old [4] and originated in China.

Gyoza is only about one hundred years old and originated in Japan. After World War II, the Japanese returned home and tried to replicate the dumplings they ate while abroad.

Here are a few other questions you may have:

Is gyoza a potsticker?

Are gyoza and dumpling wrappers the same?

No, they aren’t. They’re both made of dough, but dumpling wrappers are thicker than gyoza wrappers.

Potstickers vs. dumplings vs. gyoza: Is there any difference?

Potsticker is another name for pan-fried Chinese dumplings. It’s a literal translation of the word in Chinese as opposed to a borrowing of the word.

The differences between dumplings and gyoza are their dough wrappers and their flavors. Gyoza typically has a richer garlic flavor.

What to eat with gyoza?

People often serve gyoza as an appetizer. If you want to have them as your main course, you probably will need to serve something alongside it that’s more filling.

What to eat with dumplings?

Hopefully now you have an understanding of the difference between gyoza and dumplings.

The bottom line is that they’re both delicious and, while similar, they each have their own pleasures.

Home > Comparison > Gyoza vs. Dumplings: What’s the Difference?
About Me