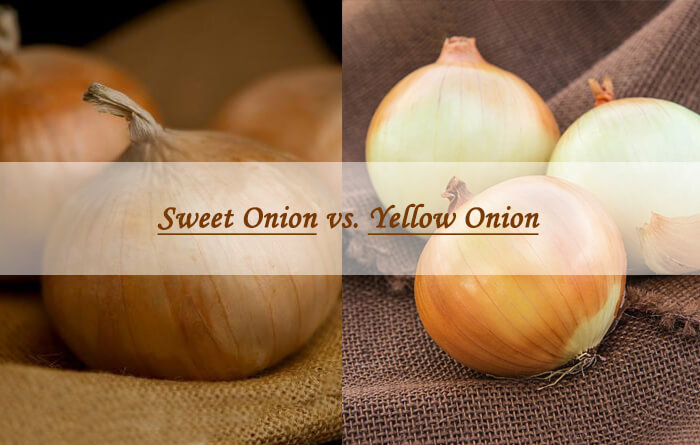 Sweet and yellow onions may look similar. But they have notable differences in appearance, taste, and usage.

As its name implies, a sweet onion has a sweet and less pungent taste than other types. And it’s mostly added to dishes as a raw ingredient, relish, or garnish.

In comparison, a yellow onion has a strong and pungent flavor and aroma. And it doesn’t break down easily, making it a great option for slow-cooked dishes.

What is Sweet Onion? 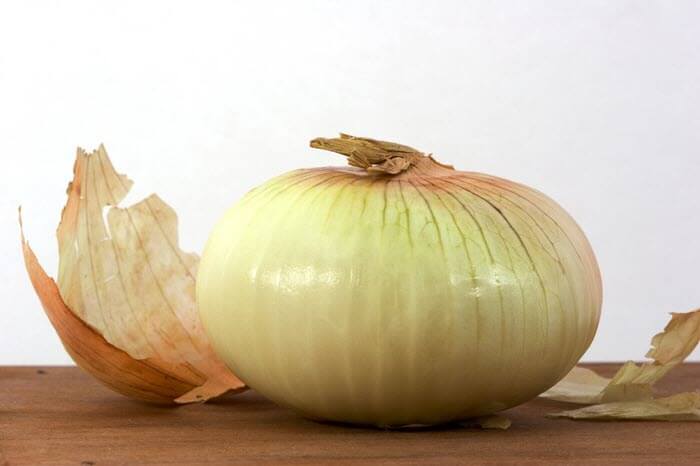 “Sweet onion” is just an umbrella term for all types of onions that are sweet.

It has several varieties, including Walla Walla, Vidalia, Maui. Generally, everything with ” sweet ” in their names. These onions are named after places where they’re native or historically grown.

Aside from its sweet taste, it’s also known for its flattened or squashed appearance. And although it’s larger than yellow onion, it has thinner skin that ranges from white to yellow.

You’d most likely see sweet onions as a raw ingredient on salads and sandwiches. Or, if not, it’s grilled or made into onion springs.

What is Yellow Onion? 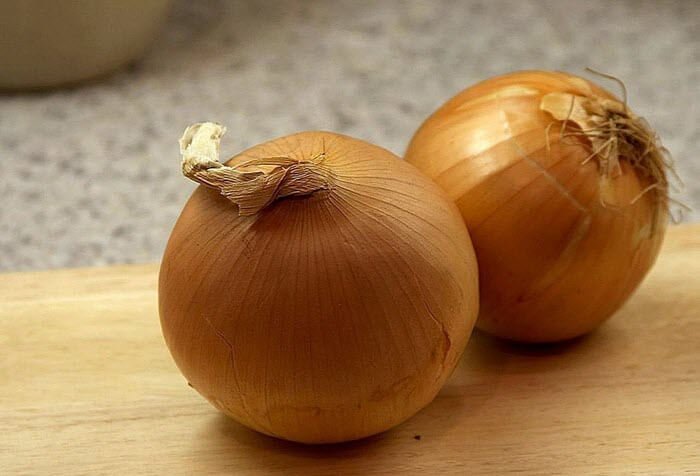 Yellow onion is a round onion that has light brown skin and white flesh. And like the typical onion that most people know, it has a strong and pungent flavor.

This one doesn’t break up easily and can integrate well into many types of dishes. Making it a go-to onion in many households and restaurants.

Since it has an intense flavor, most people can’t manage to eat it raw. To tone down its strong taste, they saute, roast, and caramelize it.  Doing these also help bring out a bit of sweetness and make the yellow onion mellow.

To help you differentiate the two better, here are the four main differences you should know:

Although they have a similar outer skin color. Sweet and yellow onions differ in size and shape.

Sweet onion is significantly larger than most types of onions. Also, it has a flattened or squashed shape. So, you may easily identify it from a shelf full of varieties of onions.

In terms of outer skin color, a sweet onion can be white or yellow, depending on its variety.

It also has thinner skin. So thin that when you press your finger into it, it may leave an impression on the outer skin.

On the other hand, yellow onions are smaller than sweet onions. And unlike the former, they have a round shape, brownish outer skin, and ivory white inside.

Additionally, it has a thicker skin and meaty layers.

Both sweet onion and yellow onion have a hint of sweetness. But one is significantly sweeter than the other.

Even when it’s raw, a sweet onion has a noticeably sweet flavor. In fact, some varieties are so sweet that you can eat them like sweet fruit.

It’s also less pungent than all other types of onion. So, it may not be a good substitute if you like an astringent taste in your dish.

However, due to its large size and sweet flavor, it’s best suitable for making onion rings. Since it doesn’t give off a strong aftertaste.

A yellow onion has a strong, astringent taste like what you’d expect on a typical cooking onion. So, most people find it difficult to eat raw.

One thing about yellow onion is that you can bring out more of its sweetness when sauteed, caramelized, or roasted.

Knowing where and how long to store onions is crucial. As this can affect their taste and texture when cooked or added to a dish.

A sweet onion has high sugar and water content, which causes it to spoil faster.

To maximize its shelf life, store it in a refrigerator. Doing this can make sweet onions last for 1 to 2 months.

However, peeled or cut onions can last for about a week. To ensure they won’t go bad fast, place them in a resealable bag before putting them in a fridge.

Unlike the former, yellow onion lasts longer than sweet onion. Plus, it doesn’t necessarily have to be refrigerated. However, it would help if you still kept it in a cool and dry area to avoid spoilage.

For peeled, cut, or cooked pieces, best to keep them in a fridge and consume them within the week.

Availability also influences why a certain variety of onions is more “popular” than the other.

Sweet onion, depending on its variety, is available seasonally. So, searching for a particular variety in your local market, let’s say Vidalia, may be difficult sometimes.

Here’s a quick guide on when some specific varieties are available:

On the other hand, yellow onions are available in most groceries and supermarkets year-round.

These are grown between spring and fall. But since they have high demand and longer storage life, the supply lasts throughout the year.

What to Use Them For?

Since sweet and yellow onions have distinctive differences, these two are mostly used in different ways.

A sweet onion has more water content than other types of onions. And having thinner skin doesn’t help either. So, adding sweet onion to slow-cooked dishes isn’t desirable as this can break down easily.

Aside from that, its sweet and less pungent flavor affects the dish’s overall taste. So, although you can use it on some dishes, it’s not always the best alternative.

More than anything, sweet onions are added raw in most dishes.

Here are just some ways to serve or cook a sweet onion:

In comparison, yellow onion is popular in cooked dishes. Thanks to its high scratch content, that prevents it from breaking down easily.

If you see an onion in a dish, it’s most likely a yellow one. Since it’s known as a “go-to” and “multi-purpose” onion.

Because of its pungent taste and great heat tolerance, yellow onion is best used for:

Can I substitute sweet onion for a yellow onion?

You can substitute sweet onion for a yellow onion.

But know that you may not achieve a strong, pungent taste on your dish since most sweet onions lack an “onion-y” taste. Plus, it breaks down easily on slow-cooked dishes.

If you need a substitute for yellow onion, your best option is red onion, as this has the same level of pungent taste. However, depending on the amount you use, this may cause a red tinge on your dish. So, measure it accordingly.

Another good option is white onion. It has a milder flavor but is crispier than yellow onion.

Is a sweet onion a regular onion?

Sweet onion isn’t a regular onion because it contains a higher level of sugar and water and lesser sulfur, which is the exact opposite of yellow, white, and red onion.

Aside from that, it’s less pungent. So, it doesn’t really give off the same effect and taste when added to a dish.

More than anything, sweet onions are added as a raw ingredient, relish, or garnish on dishes.

What are the 4 types of onions?

There are four main types of onions which are yellow, white, red, and sweet.

Yellow onion is considered the go-to type since it can integrate well into many dishes.

While red and white onions generally taste similar to yellow onions. Except that, red onion causes a red tinge on dishes, and white onion has a slightly milder astringency.

On the other hand, sweet onion has “sweetness” as its forefront flavor. Plus, it’s less pungent. Making it perfect as a raw ingredient on salads and sandwiches.

Is a sweet onion the same as a Vidalia onion?

Sweet onion is an umbrella term for all types of sweet onions. And Vidalia onion is one of them.

There are several varieties of sweet onion, and they all have varying tastes and textures.

In the case of Vidalia onion, it’s considered the sweetest type of onion available worldwide. One biggest factor that has caused it is the low sulfur in Vidalia soil, where it’s grown.

And as you may know, sulfur is a mineral that gives onions a strong, pungent taste. The lesser the sulfur content, the less pungent it would be.

Home > Comparison > Sweet Onion vs. Yellow Onion: What’s the Difference?
About Me