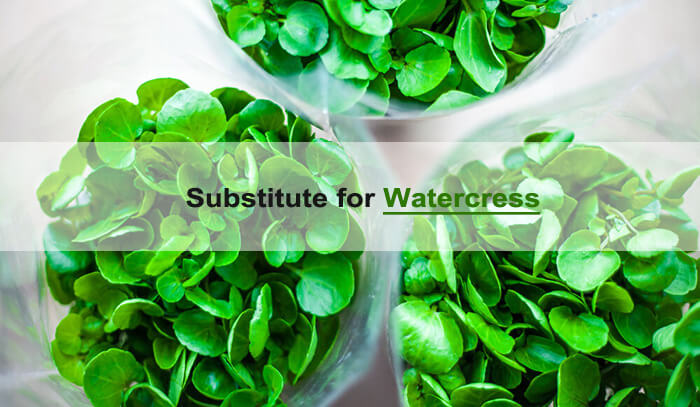 Watercress can add a zing to many recipes such as salads, soups, and sandwiches. However, for some people, watercress may be difficult to find or it might not fit into their budget.

So, we’re going to show you the top 15 watercress substitutes here.

Watercress is a popular aquatic, leafy vegetable that is native to Eurasia. The entire plant is edible, from the stems to the tips of the leaves. It’s popular served both raw and cooked, and is eaten all over the world.

Watercress has a taste that is described as somewhat peppery, close to a mustard green flavor. It loses some of the pungency when cooked. However, watercress retains the slight pepper or earthy flavor even after it has been cooked.

What Can You Substitute for Watercress? Arugula is the most popular substitute for watercress, it’s the closest match to watercress as you’ll find in a leafy green vegetable. It has a similar peppery flavor, and the nutritional content is nearly the same as watercress.

Just like watercress, Arugula retains its earthy flavor even after being cooked. What makes it different from watercress is that Arugula has a slightly tart, nearly bitter flavor when it’s raw.

What’s more, Arugula can also be used as an herb and has been around since the time of ancient Rome. 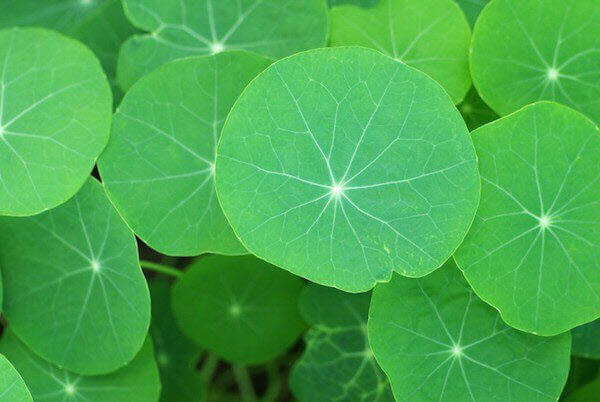 Nasturtium leaves (or Indian watercress) are popularly used in many Indian dishes. It tastes similar to watercress, but comes with bigger, thicker leaves. Nasturtium leaves are peppery and tangy with hints of sweetness and are also pungent.

Nasturtium leaf is ideal for eating raw as a substitute for watercress and is also excellently dressed with vinegar as a salad. It’s so similar to watercress in both appearance and taste that has been labeled Indian watercress.

Although nasturtium leaves are more widely available in India, they have become quite popular and are now used in dishes all over the world. Spinach is a good watercress substitute when it’s being baked into a dish, or used in items such as sauces and soups. It’s very easy to find all year long in most market areas.

When eaten raw, spinach has a slightly bitter flavor. The sweetness in it is much more dominant once cooked. Collard greens are a great watercress replacement in broiled dishes, or for stuffed leaf dishes.

Collard greens are known for their bitter flavor and thick leaves. This makes it an excellent substitution for dishes that require longer cooking, as its leaves will cook for long periods without breaking down and dissolving.

Beet greens are a great watercress replacement that isn’t often thought of. They are the top of the beet plant that has been lopped off by either the farmer or the supermarket, and are usually tossed out.

Beet greens are more sweet than bitter. They tend to have the flavor of beets no matter how they’re prepared, so they’re excellent in salads or in dishes like stir fry. This savory, crunchy green grows near rivers and lakes in tropical places. Water spinach is best when it’s steamed and mixed with other veggies, as in a stir fry. But it’s also great for use in salads, soups, or can even be deep-fried in dishes. Kale is a more bitter flavored leafy green than watercress, but it’s much easier to come by. It’s so popular and can be a good substitute for most vegetables such as watercress, bok choy, etc.

Kale is great in smoothies and salads, and is also good for use in fried and baked dishes. You can find it almost at any time of the year in much of the world. Chinese cabbage has no bitter taste and can be prepared in almost any way you can think of. It is crunchy and has more of a sweet flavor than the peppery flavor of watercress.

Chinese cabbage is in the same family as cauliflower, cabbage, and broccoli. It is often picked and stewed in dishes, but can also be fried. It’s also quite popular steamed, boiled, and even pickled as an appetizer. 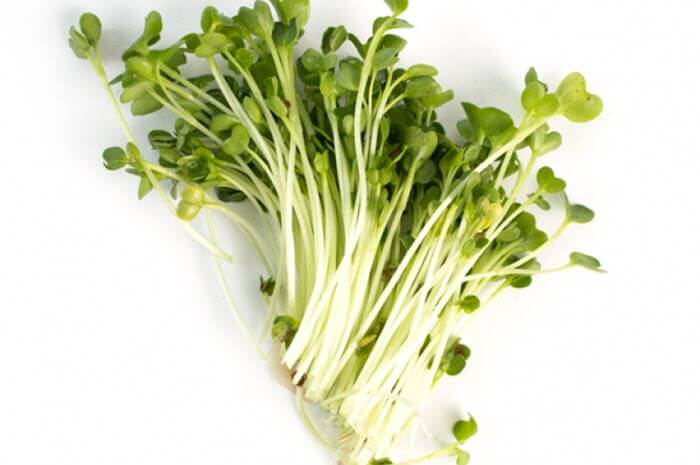 Much like beet greens, radish sprouts are an excellent watercress substitution that was almost tossed out with the garbage.

With a similar peppery kick and appearance, radish sprouts are a close imitation to watercress. They tend to taste like radishes and are excellent in salads. 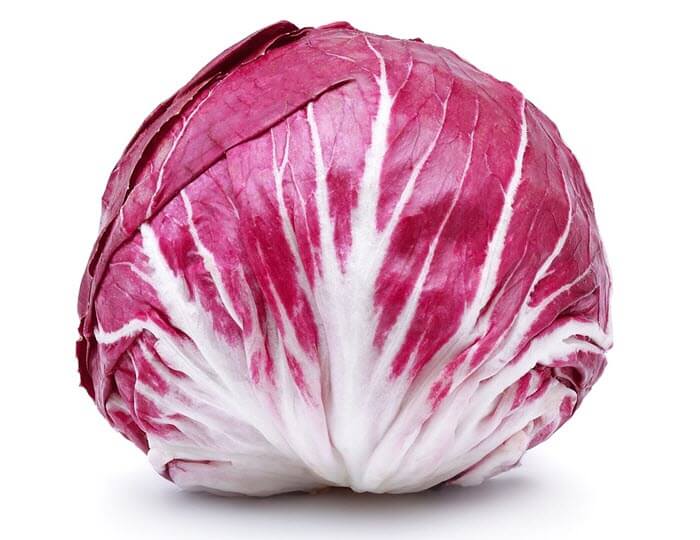 This red-colored, leafy vegetable is a spicy, slightly bitter choice that can be prepared in the same style as watercress. Radicchio is great for munching raw, and when cooked it tends to lose some of its bitterness. Purslane is a good choice in a leafy green and has a slightly sour or salty taste. It has a flavor that leans toward the flavor of watercress.

Purslane can be eaten raw or cooked in any way that you would cook and serve watercress.

Dandelion green is a leafy green that has a unique jagged edge that makes it easily identifiable.

When using dandelion green as a substitute for watercress, it can be used both raw and cooked. It has a pungent, bitter flavor, and is great for use in salads and sauces. Endive is a great replacement for watercress because it tastes like cabbage with a slight hint of bitterness. It resembles Chinese cabbage with more tightly rolled leaves.

Endive is a member of the same family as chicory and has a sweet and nutty flavor that makes it a good choice for both salads and main dishes. Lettuce comes in many different varieties, like iceberg and romaine, so it’s easy to find a watercress substitution from the lettuce family.

However, because of the wilting that occurs when you cook lettuce, it isn’t the best choice for cooked dishes.

When eaten raw, lettuce is a great watercress substitution in salads, over sandwiches, or stir fry dishes. Mustard greens make an excellent watercress substitution because they’re a hearty, leafy green that can stand up to cooking.

Thinner and more tender than collard greens, they’re rich in flavor and are excellent raw or cooked.

You can make the following dishes with your preferred watercress substitutes.

What is a good substitute for watercress in miso soup?

Watercress adds fantastic flavor to miso soup, but it’s not the only way to make this traditional Japanese soup taste great. Here are a few other ingredients you can try instead:

What’s a good substitute for watercress in salad?

There are many substitutes for watercress and other greens that are just as tasty in salads.

These greens have the same wonderful flavor and crunchy texture that watercress provides.

You can find watercress in a grocery store or at the farmers’ market during the springtime. Don’t worry if it’s not available, you can try any of the above replacements for watercress to create a delicous meal.

Home > Substitute > 15 Substitutes for Watercress Leaves in Soup, Salad, Recipe
About Me