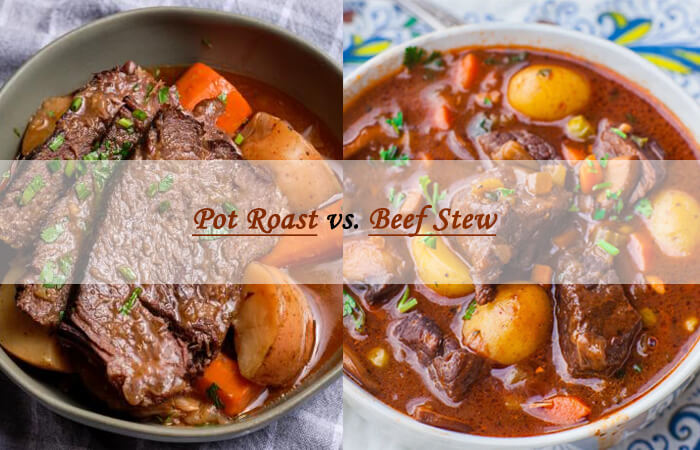 Nothing warms you up on a cold, dreary day like a hearty, meaty meal. If you’re looking for something to warm you up while it fills you up, pot roast or beef stew are the way to go.

But you may wonder, what’s the difference between pot roast and beef stew? While they share many similarities, the biggest difference is beef stew has more broth than pot roast.

Keep reading to learn more about pot roast and beef stew, as well as some delicious recipes!

What is Pot Roast? 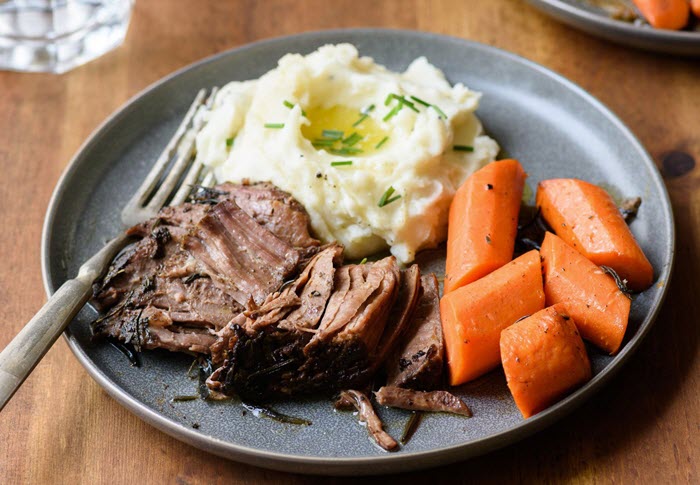 Pot roast provides a meat-forward dish embellished with a classic mirepoix [1] of vegetables like celery, onion, and carrots.

Tough cuts like chuck roast, short ribs, and other less-desirable cuts of beef transform under slow cooking under high heat. Roasts cook between 350 and 400 degrees for several hours.

Cultures throughout the world put their spin on pot roast using cultural ingredients, and Germans marinate their sauerbraten in vinegar. Jewish communities incorporate ingredients like artichokes.

2. Prepare a dutch oven with two tbsp olive oil over medium heat. Season the roast and quickly sear on all sides, then set aside.

3. Add the rest of the olive oil and saute diced carrots, onions, and celery. Once the onions are transparent, add flour and garlic. Add wine and boil to deglaze the pot. Add spices, salt, and beef broth. Bring this liquid to a boil.

4. Once the liquid is boiling, return the seared beef to the pot. Enough liquid should be in the dutch oven to submerge half of the roast in the seasoned liquid. Roast in the oven for two hours.

5. Check after two hours and add whole vegetables, two cups of beef stock, and water if needed. Vegetables should be underwater. Cook for another hour until everything is tender.

What is Beef Stew? 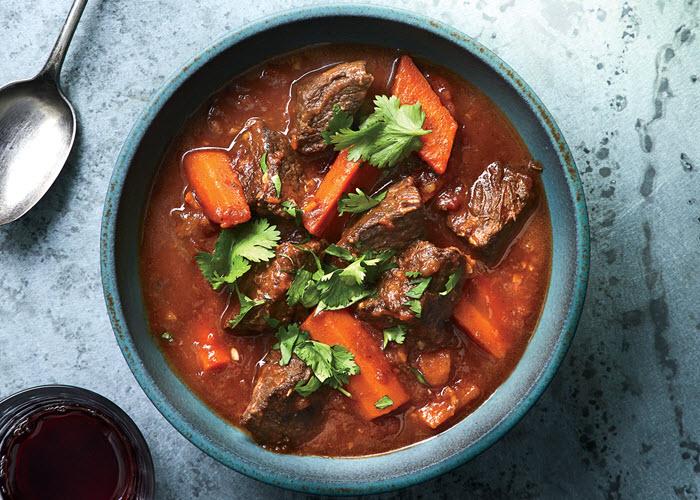 Beef stew resembles pot roast as tougher cuts of meat simmer with the traditional mix of vegetables like carrots, celery, onions, and potatoes.

This hearty meal has nourished societies since primitive times. The earliest evidence of stew comes from Japan between 14,000 to 300 BC. Beef stew illustrates a comfort food that spans generations and all parts of the globe.

1. Coat the beef cubes with flour and black pepper by tossing them in a bowl.

2. Heat a large pot to medium-high with three teaspoons of oil. Sear the beef by adding chunks for about five minutes on each side. Remove the beef chunks and set them aside.

3. Add vinegar and wine to the pot on medium-high heat to deglaze the pot. Add beef broth, meat chunks, and bay leaves, then simmer for 90 minutes.

4. Add onions and carrots to the meaty broth. After 10 minutes, add potatoes and cook for another 30 minutes. Season with salt and pepper before serving.

For those who don't know what to serve with beef stew, here are 10 side dishes.

The Ratio of Meat to Broth

Pot roast differs significantly from beef stew with the ratio of meat to broth.

A pot roast naturally produces liquid as the meat cooks, but chefs often discard this natural jus from a pot roast.

With beef stew, the deep, delicious broth makes this meal distinct. Red wine is essential in this recipe as it provides the signature beef stew flavor when cooked for about two and a half hours.

None or fewer vegetables are cooked with the pot roast, but you may use vegetables as a side dish.

About beef stew, various vegetables and seasonings are required.

Pot roast is usually cooked in the oven, while beef stew is prepared in a on top of the cooker until it’s tender.

Pot roasts take at least three hours to cook. Unlike a pot roast, beef stew comes together in about two hours.

Read on to learn more about making pot roasts and beef stews.

Can you use pot roast for beef stew?

Yes! One way to use pot roast leftovers is to incorporate the meat into beef stew. However, don’t forget you are using fully-cooked beef in your recipe, so you should add the meat toward the end.

Is chuck roast and pot roast the same?

Chuck roast [2] is the cut of meat sold at butcher shops and grocery stores that comes from a cow’s shoulder. Pot roast refers to the finished recipe, which you can make from a chuck roast.

Why is my pot roast still tough?

The biggest culprit for tough meat is undercooked beef. A pot roast must cook for at least three hours to cook through. If you have chosen a large cut of meat, you may need more than three hours.

Cook up a large cut of chuck roast for a Sunday pot roast feast. Use pot roast leftovers or other less-desirable cuts of meat to develop a slow-simmering stew from these same familiar and delicious ingredients.

Home > Comparison > Pot Roast vs. Beef Stew: What’s the Difference?
About Me