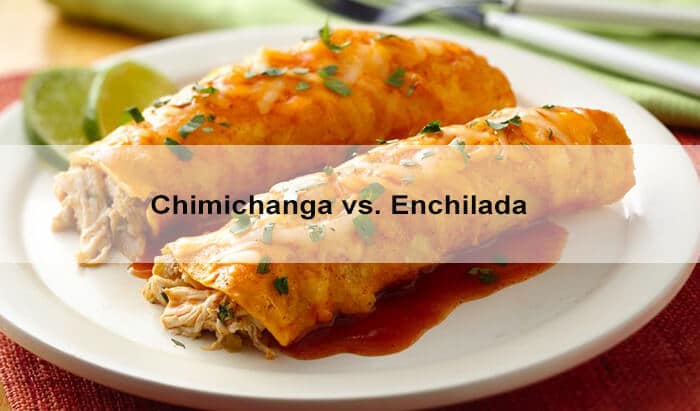 Food has a talent for bringing the best feelings in people. Mexican food is not any different.

Words like “Mexican food is the perfect meal” “I’m convinced that anyone who doesn’t like Mexican food is a psychopath.” clearly show the power of food.

This article will compare chimichanga vs. enchilada, two Mexican foods we all love. Let’s get it started!

The significant difference between enchilada and chimichanga is the wrap. Enchilada uses flour wraps, while chimichanga uses corn wraps. 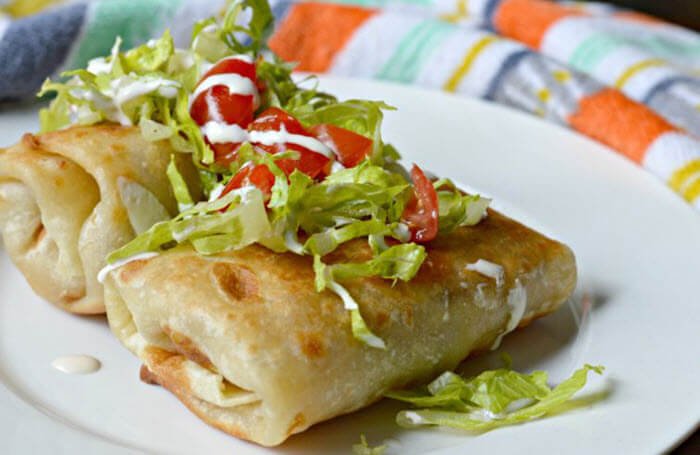 Chimichanga is a deep fried burrito. It usually contains fillings, the type of filling depends on the location and the chef’s plan.

Usually, a chimichanga is filled with slow-cooked beef and peppers. But it can also be filled with beans, cheese, rice, and other meat types.

To compliment your chimichanga, you can serve them with sour cream, enchilada sauce, guacamole, and cheese. These compliments are not usually inside the chimichanga because it’s deep-fried. 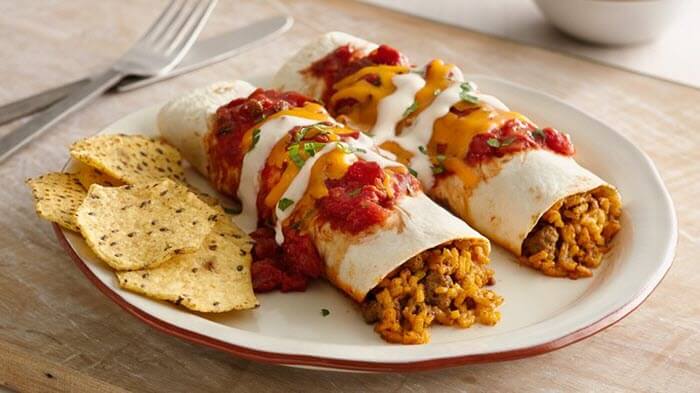 Enchilada was a dish prepared by native Mexicans to make the most of leftover foods. But it gradually evolved into popular street food.

An enchilada is a small corn tortilla wrapped around a filling. Usually, it’s served with sauce and cheese toppings. But like a chimichanga, the sauce and fillings depend on what you desire.

The thing with native foods is that some are so alike you can’t distinguish between them. But relax; we are here to solve the mystery.

Difference Between Enchilada And Chimichanga

These are some of the differences between enchilada and chimichanga.

Enchilada is a traditional Mexican cuisine, while chimichanga is Tex-Mex food. It is of Mexican-Spanish origin. Woody Johnson of Macayo’s Mexican kitchen believes he invented chimichanga. He accidentally dropped a burrito into a deep fryer.

Enchilada is a corn tortilla that wraps around a meat filling with spicy sauce. In comparison, a chimichanga is a deep-fried burrito that shares similarities with an enchilada.

The significant difference is in the wrap; enchilada uses corn wrap while chimichanga uses flout wrap.

Enchilada fillings vary, but it doesn’t contain rice. Fillings usually depend on preference and location.

The sauce of enchilada is usually a specific one; it’s either cheese sauce or chili sauce.

The filling includes beans, cheese, rice, and meat with a chimichanga. You can serve it with any sauce of your choice.

Enchilada is prepared with corn tortillas, unlike burritos with a flour tortilla. Chimichanga is a deep fried burrito.

Those are some differences between enchilada and chimichanga. If you are feeling inspired and you want to try out these foods. Follow these steps:

How to Prepare Enchilada and Chimichanga

And that is it, quite simple to prepare. Enjoy your Mexican dish any way you like it, with the right ingredients, and feel the power of good food.

FAQs About Chimichanga vs. Enchilada

Do both dishes taste alike?

Considering they share some similarities, they might have similar tastes sometimes. But, if a rice filling is used for chimichanga, the difference in taste is unmistakable.

Also, some persons with sensitive taste buds can tell the difference in the wrap; one is corn and the other flour.

Is it healthy to eat chimichanga and enchilada?

Yes! They are both nutritious foods containing beans, meat, and cheese. You can also get other nutrients from it from the fillings used.

What ingredients can I use to prepare my enchilada?

You can use potatoes, beans, cheese, vegetables, or meat as fillings. Pork and chicken are great filling choices too.

What ingredients can I use to prepare my chimichanga?

You can use rice, beans, cheese, minced, dried, or marinated meat. Just have fun with it.

Can I bake my chimichanga and enchilada?

Of course, you can bake both cuisines. If you are watching your fat intake, baking is a great option. Use your oven at a 175°C temperature and bake.

Is there any similarity between both cuisines?

Yes, there is a slight similarity. Both foods can be eaten with a fork, and they can have similar fillings.

Is there any difference between enchilada and burritos?

Yes, there is. The enchilada sauce contains minced meat, cheese, tomatoes, and leaves. But with burritos, this is not the case.

Also, enchiladas are sumptuous cuisines; their sauce embellishment makes them more delicious. They are best eaten with forks, but this doesn’t apply to burritos.

Can I Freeze my enchilada and chimichanga?

Yes, you can freeze both foods. Store the raw form of both foods in an airtight container in your freezer. They can last for six months. You don’t have to thaw after freezing; pop them in your heated oil and deep fry.

What can I pair with my chimichanga and enchilada?

Guacamole, chili sauce, sour cream, and salsa are great sides to pair both dishes. But feel free to play around with it.

Home > Comparison > What’s the Difference Between Chimichanga and Enchilada?
About Me