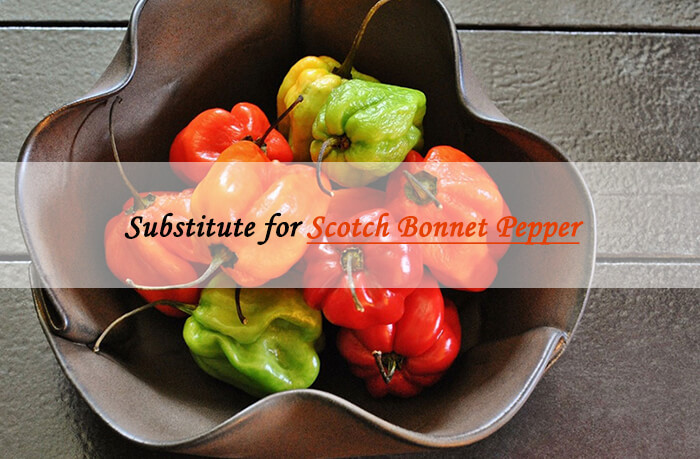 Scotch Bonnet Pepper is one type of hot chili pepper used in many dishes globally.

While it’s mostly available year-round, you may find yourself at one point looking for a decent alternative for it.

What is Scotch Bonnet Pepper?

Scotch Bonnet Pepper is a hot variety of chili pepper. It’s an irregularly-shaped small pod that comes in different colors: yellow, orange, and red, depending on its maturity. Plus, its skin texture is wrinkly and waxy.

In terms of taste, it has fruity and floral undertones. And since it’s categorized as an ” extra hot” chili pepper with 100,000 to 350,000 Scoville units, you’d feel a pungent heat a few seconds after tasting it.

Most people use this type of pepper for soups, stews, curries, and hot sauces. And also to season meat, poultry, and fish.

What Can You Substitute for Scotch Bonnet Pepper?

If you’re looking for some of the best substitutes for Scotch Bonnet Pepper, here are 14 similar-tasting alternatives you can try: 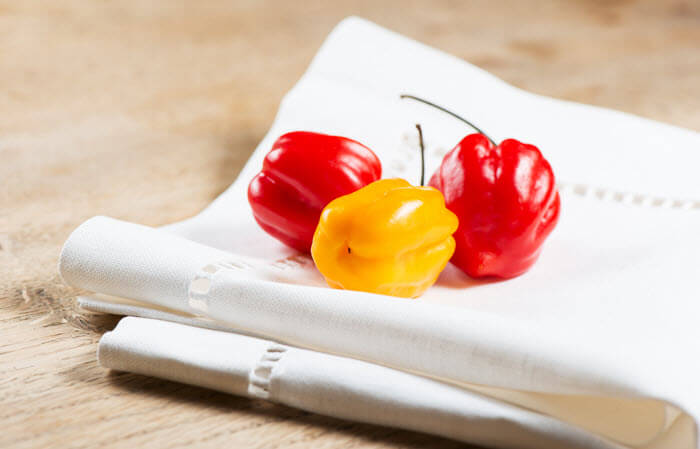 Habanero looks similar to Scotch Bonnet, except that the former is slightly larger.

But more than that, Habanero is considered the best substitute since the two have the same taste. Which is sweet, fruity, and tropical. Not to mention that they have the same hotness level as well.

If you’re using Habanero as an alternative, you can follow a 1:1 ratio. 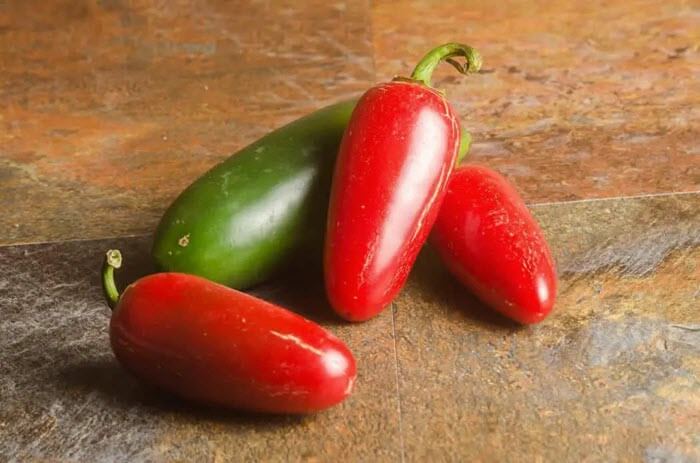 Suppose the recipe you’re making requires a Scotch Bonnet, but you can’t take its spiciness, grab a Jalapeno.

Jalapeno pepper is easily available in most markets. And it gives off a slightly sweet flavor when fully ripe (red).

When using Jalapeno as an alternative, follow a 10:1 ratio (Jalapeno:Scotch Bonnet) or more. 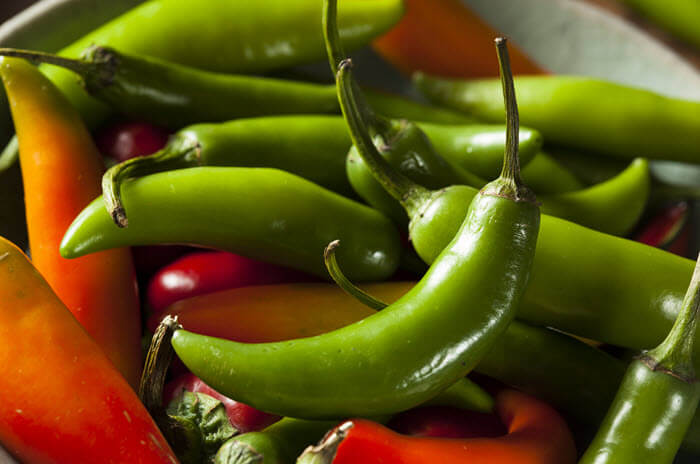 Can’t find a Jalapeno Pepper either? Then, Serrano Pepper is your best bet. It’s a small green chili pepper about 2 to 4 inches long.

It has a similar taste to Jalapeno, except that Serrano is slightly spicier, with Scoville units of 10,000 to 23,000. That’s 9 times hotter than Jalapeno Pepper.

Follow a 8:1 ratio when using Serrano as Scotch Bonnet substitute. 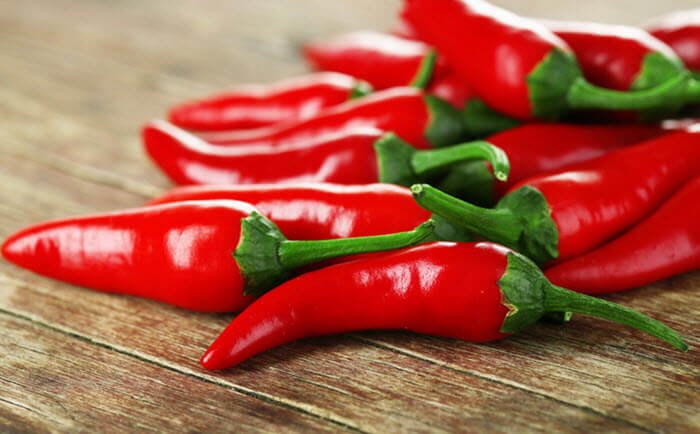 If you love the taste and flavors of Scotch Bonnet Pepper minus its intense heat, get a Cayenne Pepper.

Cayenne is a small, lean chili pepper about 2 to 5 inches long. It’s green when unripe and red when fully ripe.

It has a spicy taste with sweet undertones similar to Scotch Bonnet. And the only thing different about it is its spiciness, which is at least 2 times milder than Scotch Bonnet. 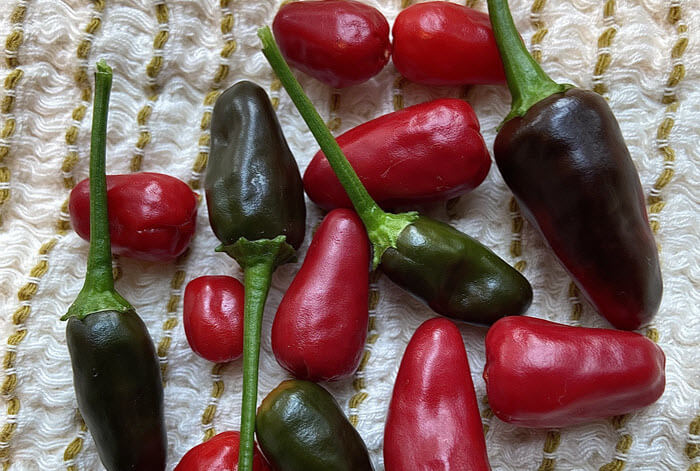 Pequin Pepper is another great substitute with a spicy and sweet flavor.

Although it’s tiny compared to other types of peppers, Pequin Pepper is 5 to 24 times hotter than Jalapeno. It has 40,000 to 60,000 SHU, which is considered “hot” based on the Scoville scale.

Aside from being sweet and spicy, it has smoky, floral, citrusy, fruity, and nutty undertones, making it goes well with many dishes. 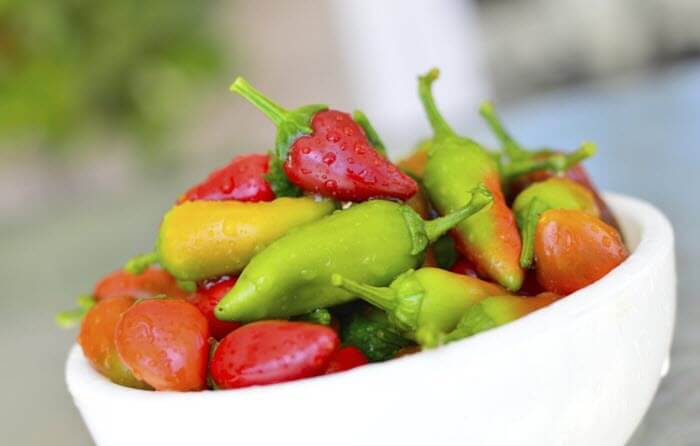 Fresno Pepper is another great alternative for Scotch Bonnet.

It looks similar to Jalapeno but comparably smokier and slightly spicier than it. Plus, Fresno Pepper has thinner walls, making it great for drying chilis.

As a mild chili pepper, Fresno has a manageable heat level enough to spice up certain dishes. And in terms of flavor, it has sweet and fruity undertones that resemble Scotch Bonnet Pepper. 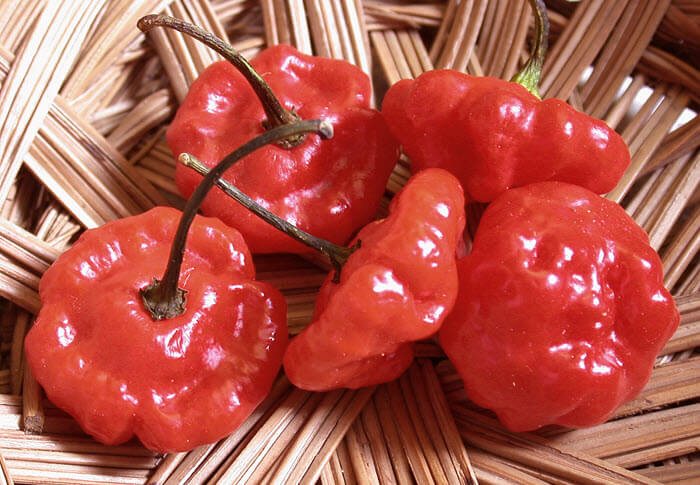 Rocotillo is a squished-shaped pepper that looks similar to Scotch Bonnet, only that it’s smaller. Plus, it has a mild hotness level at 1,500 to 2,500 Scoville units.

Aside from that, Rocotillo is considered a good alternative to Scotch Bonnet since the two have the same sweet and fruity undertones.

Many agree that Rocotillo Pepper has a toned-down Scotch Bonnet flavor. 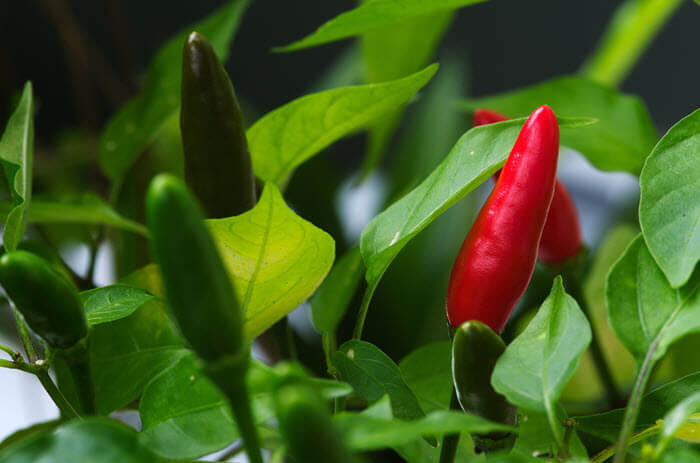 Like Scotch Bonnet, it has sweet and smoky undertones. And is often sold dried.

The only downside about African Bird’s Eye Pepper is it’s not as available as most alternatives. 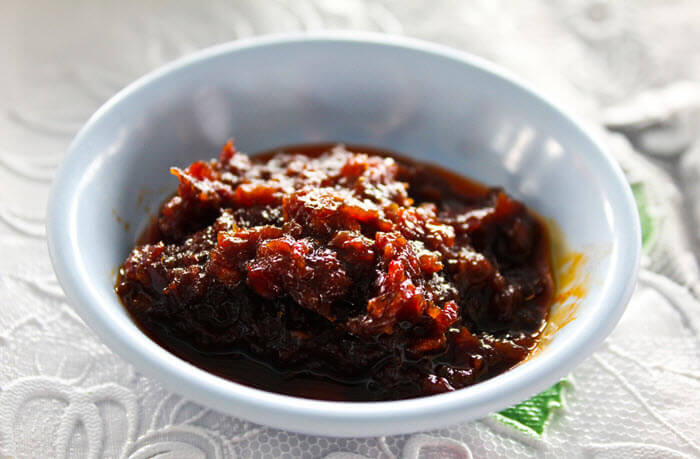 Thai chili paste is made from various spices, shrimp paste, fish sauce, and Thai chili peppers. So, it may not be suitable for dietarians and vegetarians.

Because it’s made from various ingredients, it gives off a great fragrance and unique flavor.

Depending on the maturity and number of Thai chilis added into the mixture, Thai Chili Paste can have 50,000 to 100,000 Scoville units. Which is considered “hot.” 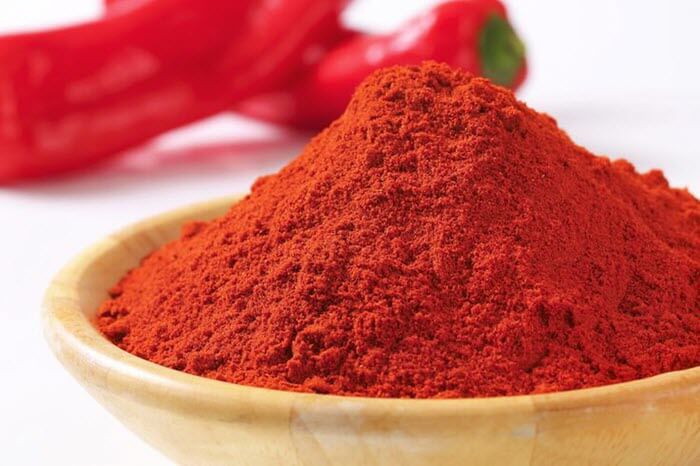 Want a powder substitute for Scotch Bonnet Pepper? Then, grab a bottle of Cayenne Pepper Powder.

Like its whole pepper counterpart, it has a similar taste and flavor to Scotch Bonnet Pepper. Only this time, it’s turned into a powder for easier dish integration.

If you’re using Cayenne Pepper Powder as a substitute, use ¼ teaspoon of it. And add more as desired. 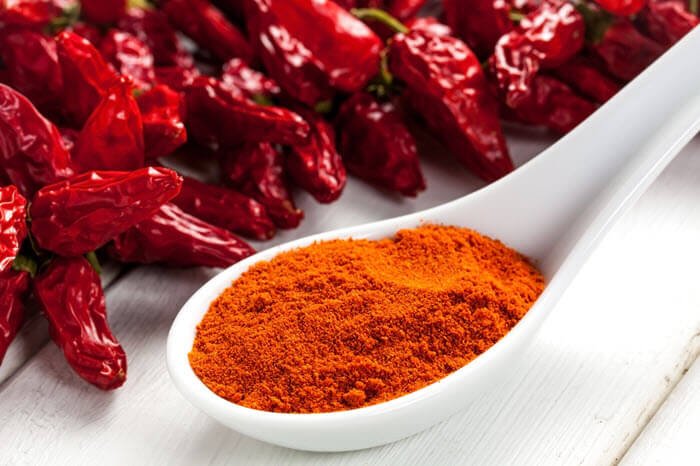 If you need to use Scotch Bonnet Pepper for a dish but are allergic to capsaicin, use Paprika.

Paprika is a powdered spice made from dried and ground sweet pepper pods like Bell Peppers. And as you may know, Bell Peppers have no capsaicin and have 0 Scoville units.

Although that’s the case, Paprika has sweet and fruity flavors similar to Scotch Bonnet. So, you can still enjoy the taste of Scotch Bonnet minus its spiciness. 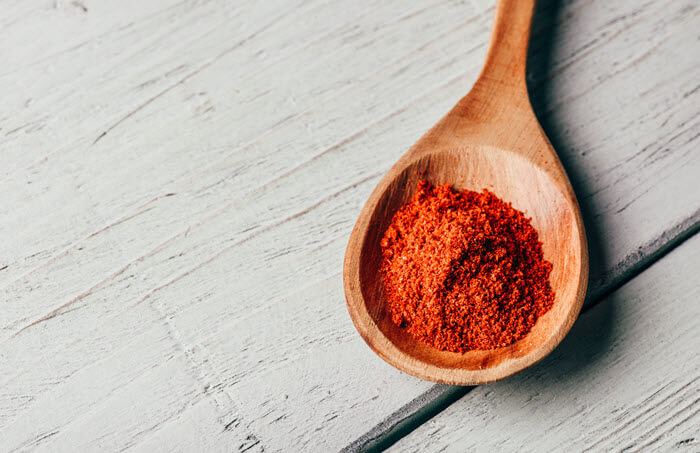 Chili Powder is also a good alternative made from various finely ground spices.

Its hotness level would depend on how much Cayenne peppers were used in making it. But generally, a Chili Powder has 500 to 1,500 Scoville units. 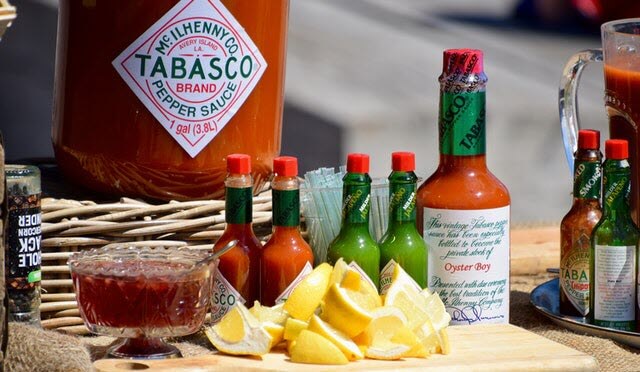 If you want a slightly milder substitute but in a sauce form, try Tabasco sauce.

It’s an American sweet and spicy hot sauce made from Tabasco peppers, salt, and vinegar. With Scoville units of about 3,750, which is “mild.”

Unlike the powder and paste alternatives, the making of Tabasco sauce takes longer. Since it has to be fermented for 3 years. 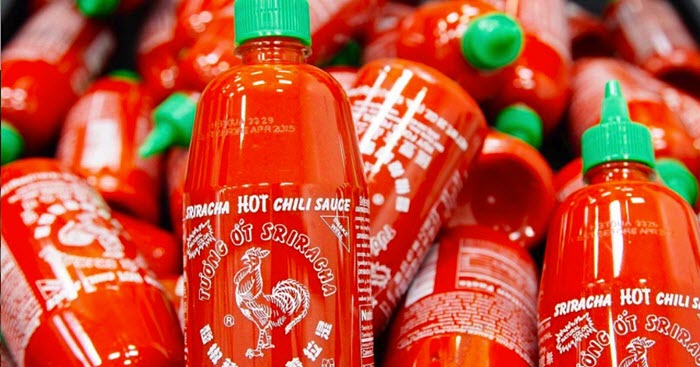 Try Sriracha sauce if you want a much milder sauce-type alternative.

It’s a popular condiment in Asian cuisines made from Jalapeno, garlic, vinegar, sugar, and salt. This mixture of spices gives off a mild spicy flavor with a tinge of sweetness.

Since it’s made from Jalapenos, it has 2,200 Scoville units, which is enough to spice up any type of dish.

What is hotter – Scotch Bonnet or Habanero?

Scotch Bonnet Pepper and Habanero are equally hot since they have the same Scoville units of 100,000 to 350,000. And that’s what makes them a perfect substitute for each other.

Is Scotch Bonnet the same as Habanero?

Although they have similar taste and hotness levels, Scotch Bonnet and Habanero are different from each other.

For once, Scotch Bonnet has an earthy undertone, while Habanero has a smoky flavor.

Is Ghost Pepper the same as Scotch Bonnet?

Aside from the fact that a Ghost Pepper has a pointy end, it’s also significantly hotter than Scotch Bonnet, with Scoville units of 855,000 to 1,041,427.

Where to buy Scotch Bonnet Pepper?

You can most likely buy Scotch Bonnet Pepper in Caribbean-owned local stores or high-end supermarkets. Or online for easy and convenient access.

Home > Substitute > What is a Good Substitute for Scotch Bonnet Pepper? 14 Options
About Me