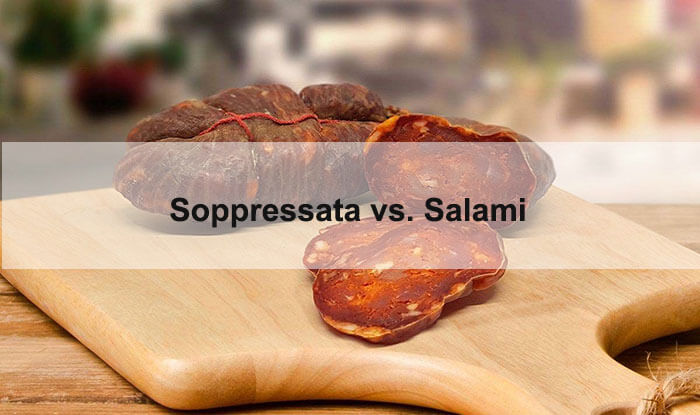 The question of soppressata vs. salami is more complicated than you may think, based on the relationship between the two. Salami is the blanket term for the type of cured meat often found in Italy. Soppressata is a type of salami with its own unique characteristics.

Salami is a cured meat presented in a cylindrical shape. This food is made of animal fat, various spices, and minced meat—often pork. Salami has robust seasonings and makes a natural pairing eaten simply as-is with a cheese and cracker platter.

Salami comes in a wide variety, from the genoa salami you commonly see on a classic charcuterie board to the pepperoni sprinkled on top of your favorite pizza. It does not indicate a specific recipe, color, shape, or cooking process to be considered salami.

Italy is a country that is very proud of the distinct customs and heritage found in the different regions of Italy. Processed meats that are considered salami come from all over Italy, from Genoa to Milan and Tuscany.

Further Reading: Salami vs. Pepperoni: What’s the Difference Between Them?

Other Types of Salami

While salami was invented and perfected in its homeland of Italy, other countries have attempted their own unique version of this processed meat.

In addition to the many varieties of salami in Italy, France, Spain, Germany, and Hungary all have their own preferred versions.

Soppressata is a dry, Italian salami that can be cured or uncured meat. Unlike other salami, it stays true to a specific recipe and is defined by the region of Italy it comes from. Soppressata also has a unique storing technique and is available in spicy or mild flavors.

Soppressata comes from a specific region of Italy, based on whether it is cured or uncured.
Cured sopressata hails from Calabria most often, but also Basilicata and Apulia. Uncured sopressata is made in the Liguria region or in Tuscany.

This processed meat is commonly made with pork, but other recipes use beef, which is ground and pressed into an uneven shape, like a flat oval. This rustic appearance is in direct contrast to salami, which often has a very uniform cylindrical shape and is sliced into perfect circles.

The soppressata is dried for a long time to achieve its final flavor, a process that can take between three to twelve weeks. The final product is a deep red color and is often cut into thin slices and served with a charcuterie tray or simply on a slice of rustic bread.

What’s the Difference between Salami and Soppressata?

If you call soppressata a salami, technically, you aren’t wrong. You are just using the broad category name instead of the specific name for soppressata. However, for the sake of being exact, here are telltale signs you have a soppressata vs. salami.

Salami is most commonly eaten as-is, straight from the package and onto a meat and cheese board. It is an excellent accompaniment to various cheeses, from smooth Gruyere and fontina cheeses to robust Irish cheddar or even a funky goat cheese.

Salami is often found in cold-cut sandwiches piled high with similar meats into an Italian sub sandwich. One of the most popular pizza toppings of all time is an Italian-American creation borrowed from the masters and now globally famous: pepperoni.

If you are looking for wine pairings for salami, try a red wine that can stand up to these flavorful and often slightly spicy processed meats. Reach for a medium-bodied Malbec for a delicious salami pairing with the variety of cheeses listed above.

Soppressata’s pairing is dependent on the kind of it you have.

A spicy soppressata will be well-balanced with Swiss or fontina cheeses for a smooth complement to this spicy meat. Try a full-bodied white wine like a Chardonnay or, if you’re more of a red wine drinker, reach for a robust Syrah to balance out the spicy soppressata.

If you have chosen a mild soppressata, bring in a spicy kick with pepper jack cheese for a perfect bite. A great wine pairing for this mild salami would be many of the most popular varietals, including Sauvignon Blanc for white wines and Pinot Noir for red wine drinkers.

Soppressata is easily distinguishable from other salami by its color, size, and the region of Italy it hails from. Salami is a prevalent kind of food in Italian cuisine and makes up an entire category of meat, of which soppressata is a part.

Salami’s influence has extended beyond Italy as well. These signature flavors are also replicated throughout other areas of Europe and even the United States, with the popularity of Sauccison Sec, pepperoni, and Salchichon.

Home > Comparison > Soppressata vs. Salami: What’s the Difference bewteen Them?
About Me