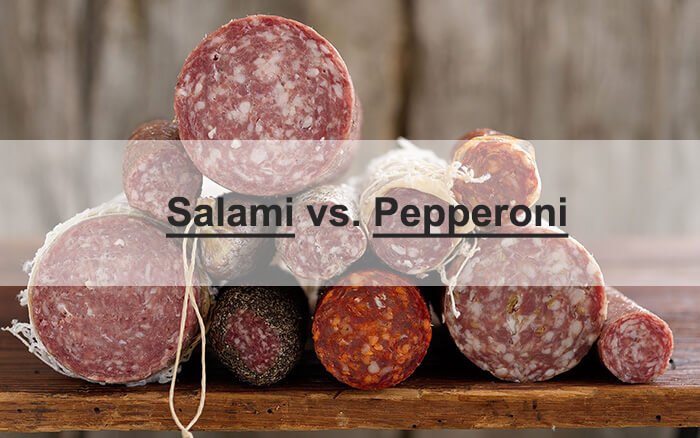 “There is no better feeling in the world than a warm box of pizza on your lap”!.

It doesn’t matter that it’s a round meal in a square box and cut into triangle slices. Pretty confusing concept, yes? But the taste is not confused in any way, it’s point-blank amazing!

So, when you choose your favorite pizza flavor what is your go-to topping spice? Would you prefer Salami or Pepperoni? Since these two can be used as toppings, are they the same thing?

Let’s find out what Pepperoni and Salami are all about. 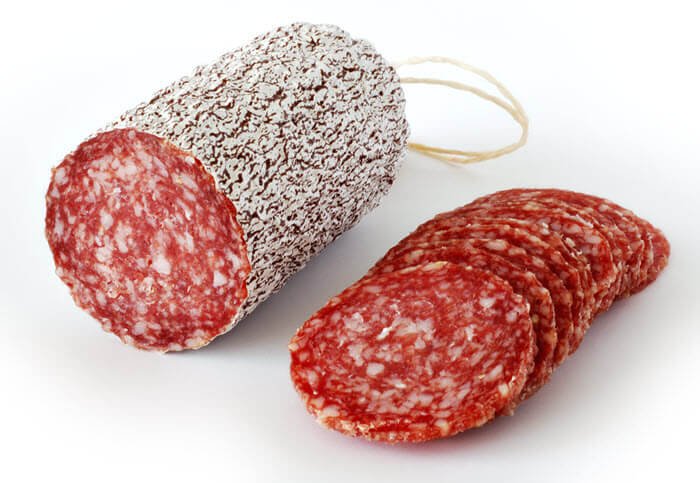 Salami is fermented, air-dried and cured pork or beef meat wrapped in sausage casing. It was formed by Italians who were looking for a means to maintain the freshness of meat at room temperature.

Salami can be prepared spicy and contain fat or it could be without fat and spice. It consists of ingredients like garlic, salt, vinegar, fennel, cinnamon, mace and other spices in addition to meat trimmings.

Types of Salami and What are They Made of

As already established, pepperoni is a type of Salami, although spicier and meatier. The classification is in the type of meat part used and probably the ingredients used for preparation.

Some other types of salami are:

These are a few of the Salami types available today. Now that we know what these two spiced meat toppings are and their types, what are their differences? 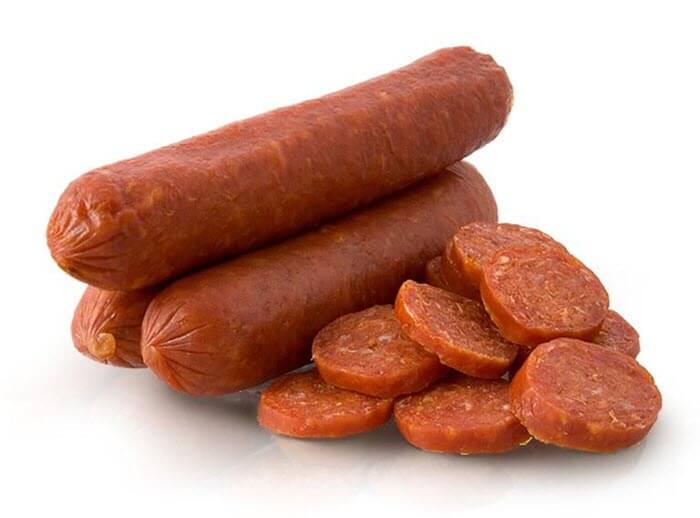 Pepperoni is derived from the Italian word ‘peperone’ meaning bell pepper. It is a dry, soft, spicy sausage consisting of fine cured pork and beef seasoned with chili or paprika.

Its major spice includes peppers (white and red), anise (a flavoring agent that is sweet and aromatic) and paprika.

It has a complex taste, which works perfectly with pizza, this is because it contains a larger proportion of spice to meat than most salamis.

Despite its sweet, savory and attractive marketing strategy, pepperoni is a type of salami that is popular in the United States, feel free to call it the “American salami”.

What is Pepperoni Made of?

Although there are many types of pepperoni, the main ingredients in a pepperoni are pretty similar:

Salami vs. Pepperoni: What is the difference?

Like any two items that can be used as substitutes or that seem to be alike, there are always differences. These are differences between salami and pepperoni: 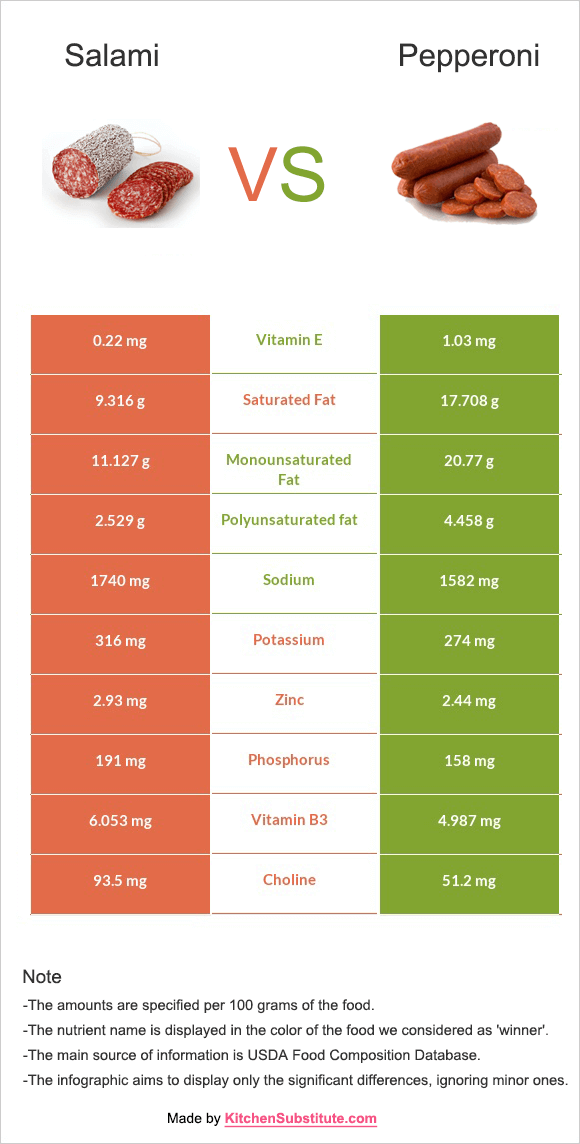 This picture is protected by copyright. You MUST link to us when using it!

Pepperoni has a smokey taste and smell than other salamis, hence the extra flavor it has.

Does salami taste the same as pepperoni? Absolutely not!

Unlike most salamis that are roughly ground, pepperoni has a fine-grained texture that is soft but dense and easy to slice. This quality makes thinly sliced pepperoni remain flat when placed on the pizza top and heated up.

Pepperoni is largely spicier and meatier. It’s closely similar to salamis like Napoletana and soppressata.

You May Like: Soppressata vs. Salami: What’s the Difference bewteen Them?

Unlike salami that can be used in any dish, hot or cold, pepperoni is streamlined to only pizzas.

Salami can also be of any kind and form, it could be cooked, aged, spicy, sliced into any diameter and gotten from anywhere. Unlike Pepperoni, which is unique to America. Salami can also serve as a supplement in a wide variety of recipes from soups to pasta sauces, eggs, and even salads.

Recall that earlier we described pepperoni as a “redder” salami? Well, this is because of paprika and chili that’s added as a curing agent.

Sometimes turkey can be used to make pepperoni while salami uses veal, beef, pork and poultry.

Salami is seasoned, air-dried and cured sausage that can be eaten cold or hot. Pepperoni is a sausage made with pork or beef and seasoned with pepper and paprika.

Salami contains fewer calories, hence it is healthier. An average of 3 ounces of Salami has a calorific value of 415 calories while that of pepperoni contains 551 calories.

9. Pepperoni is a type of salami but, a salami is surely not a type of pepperoni, it’s a type of deli meat.

10. In Italian culture, salami is served at lunch with antipasti, while pepperoni is usually a pizza topping and can’t be eaten alone.

11. Pepperoni has a huge “pizza fan base” in America, as it’s mostly used as a pizza topping in America. Some people also use it in their sandwiches.

We have seen a few differences between salami and pepperoni, but since one is a form of the other, there has to be some form of similarity.

Let’s discuss what salami and pepperoni have in common.

Similarities Between Salami and Pepperoni

But if you are feeling a little unsure about that, you can always fry in little oil.

Secondly, the white marbling found on the body of both salami and pepperoni is high-quality, fresh pork fat.

Now that we know these things, what else do you need to know about salami and pepperoni?

FAQs About Salami and Pepperoni

We will answer some questions that you might have thought to ask about salami and pepperoni.

Salami vs. Pepperoni: which one is better with pizza?

From the beginning of this “battle of the taste buds”, we can tell that the winner is whichever one you prefer. So, if you like your pizza with a spicy, peppery flavor, then that’s best with your pizza.

But if you like something more on the less spicy, more sour and herbal side then your crowned winner is salami. It largely depends on your choice and favorite pizza flavor.

Can I use Salami instead of Pepperoni?

Definitely! Pepperoni is a variant of salami, and they both have meat similarities, so yes you can but it’s important to remember that pepperoni has a hot spicy taste.

Is Salami beef or pork?

Salami is usually made of pork meat, but some types may be made of beef. Some even venison, poultry or other meats.

Is pepperoni or salami a sausage?

Yes, both of them are sausage. Pepperoni is a cured dry sausage, it is similar to the spicy salamis of southern Italy.

Salami is considered a type of Italian cured sausage which is highly seasoned.

Is salami OK on pizza?

Yes, Italian salami can be used on pizza, just cut it into cubes and add to the topping.

Is salami bad for health?

Salami (especially Genoa salami) is high in saturated fats making them hardly healthy food. According to the latest study, eating too much salami can boost the risk of cancer and heart disease.

If you are still here, it’s clear your Salami and Pepperoni confusion has been cleared.

Although they are used interchangeably and one is a form of the other, salami and pepperoni both hold their specific places in the kitchen.

So, enjoy the flavors and look that these two meat types have to add to your meal, explore their different kinds and ingredients. Remember variety is the spice of meat!

Home > Comparison > Salami vs. Pepperoni: What’s the Difference Between Them?
About Me