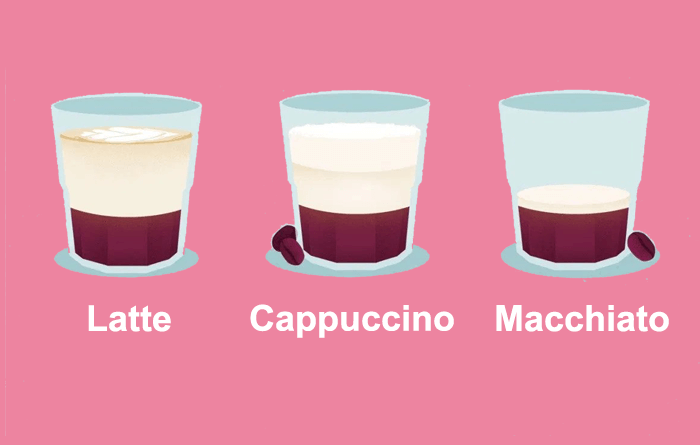 Have you ever walked into a coffee shop and seen a ton of items on the menu that all seem to be the same?

There’s the macchiato, the latte, and the cappuccino, all of which seem to be the same thing.

Well, despite the fact that these drinks might seem to be the same, they’re actually a little bit different. Let’s take a look at the difference between a latte vs. cappuccino vs. macchiato.

All About the Latte 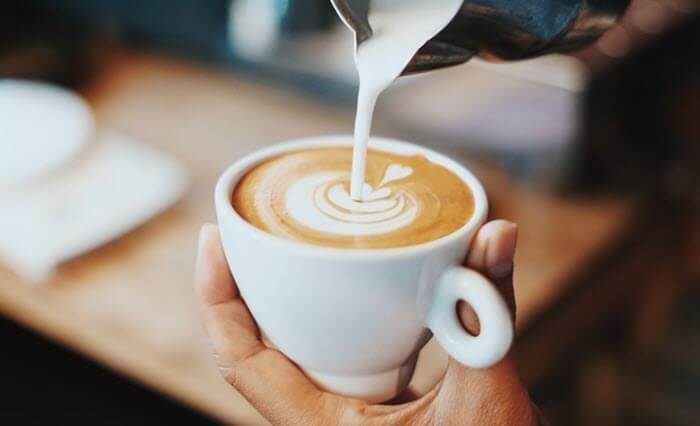 Let’s start with the latte.

Lattes first started appearing in the 19th century [1], although it’s hard to say exactly where they came from.

Unlike cappuccinos, lattes contain a whole lot more milk and don’t have a lot of milk foam on top. As a result, they tend to be less airy and much creamier.

Lattes don’t actually have to contain milk at all. You can also make tea lattes, which consist of a base of tea instead of espresso and then steamed milk to top it off. 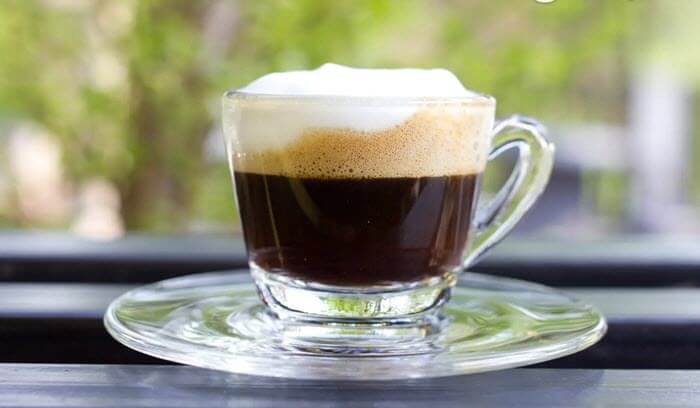 Next up is the macchiato. Macchiatos are espresso shots with a touch of steamed milk.

In fact, the word macchiato is actually Italian for “marked.” The name originated because the espresso was marked with a hint of milk foam.

Macchiatos are typically very small, just a hair larger than a shot of espresso. They’re usually served in a small ceramic cup.

Unlike lattes, macchiatos don’t contain any steamed milk. They only contain milk foam.

Many baristas will actually spoon the foam onto the drink so that they don’t accidentally pour steamed milk into the beverage.

A Quick Look at the Cappuccino 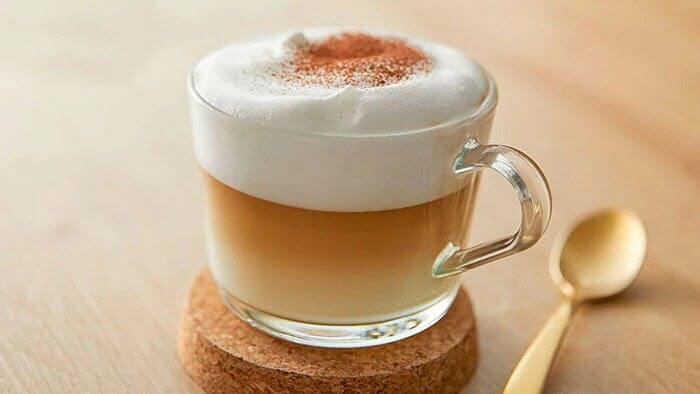 The cappuccino is one of the world’s most popular drinks, and for good reason! This beverage is made of a shot of espresso topped with both steamed milk and milk foam.

The beverage originated in Italy and got its name from the Capuchin monks [2]. The monks used to wear milky white robes that resembled the creamy white milk foam on your classic cappuccino.

As a result, coffee-lovers began to call the drink cappuccino after them!

Cappuccinos are traditionally topped with cinnamon. However, today, this varies.

In Australia and New Zealand, your cappuccinos typically come topped with shaved chocolate. In the US, they don’t usually have a topping at all.

Latte vs Cappuccino vs Macchiato – Differences

Okay, so you’ve got a good idea of what each of these drinks is. But, what makes them different?

Let’s take a look at some of the key differences between the latte, cappuccino, and macchiato.

Probably the most obvious difference between these three drinks is the size. A lot of this has to do with the amount of milk added to the drink.

Macchiatos, for instance, are a shot of espresso marked by a dash of milk. Because they have so little milk, they’re not very large.

Most macchiatos are just over 60 ml (the average size of an espresso shot). They’re served in miniature ceramic cups or in shot glasses.

Cappuccinos are a bit larger. They’re usually served in ceramic cups but measure 150 ml. That’s roughly five times as large as a macchiato!

Cappuccinos have equal parts espresso, steamed milk, and milk foam. As a result, they’re not huge, but they definitely have more volume than a macchiato.

Last up is the latte. Lattes are made of one part espresso to two parts milk. Lattes are generally served in ceramic mugs that are slightly larger than a cappuccino cup.

Another key difference between each of these drinks is the type of milk. 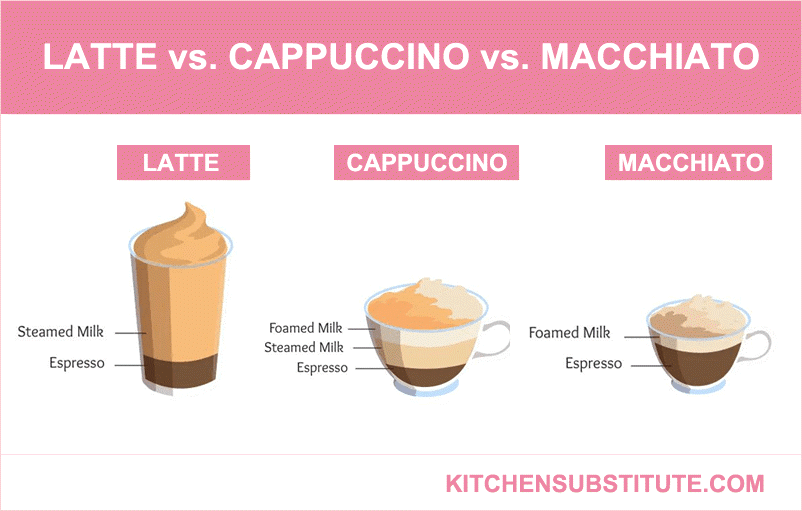 Cappuccinos, in contrast, introduce a bit of steamed milk. Steamed milk is warm and creamy, but doesn’t contain the bubbles that milk foam does.

Finally, lattes contain almost entirely steamed milk. They’re usually topped off with just a touch of foamed milk, although some baristas won’t put any foam in the drink at all.

Interestingly enough, the caffeine content of these drinks is all pretty similar. The reason for this is that all three drinks typically contain a single shot of espresso.

The espresso is what gives the beverages their caffeine content.

A single shot of espresso contains about 63 mg of caffeine [4], which means that your traditional cappuccino, latte, and macchiato all contain about this much caffeine.

Now, some coffee shops will make their cappuccinos and lattes with two shots instead of one. In this case, these drinks would actually contain about 130mg of caffeine instead of 63mg.

If you’re sensitive to caffeine it’s probably better to order a macchiato (even if it tastes stronger!).

Cappuccinos, lattes, and macchiatos have pretty different calorie counts. Once again, the reason for this has to do with the amount of milk in each drink.

A single shot of espresso actually only contains about 10 calories. However, milk contains quite a bit more than that.

Since macchiatos typically only have about 60 ml of milk foam, they usually clock in at around 35 calories [5]. If you’re wanting a low-calorie option, this is a great drink to order.

Cappuccinos have a bit more milk. However, the majority of the milk in these drinks is foam, which doesn’t contain as many calories as dense steamed milk. Cappuccinos have about 100 calories in them per serving.

Lastly, lattes have the highest calories since they have the most steamed milk. A latte typically has around 200 calories in it.

One thing to note is that many people add sugar and syrups to their coffee, especially to their lattes. Remember that anything you add to your drink will drive up the calorie count.

You should also consider that the type of milk you use can impact the calorie count.

While these drinks are traditionally made with whole cow’s milk, you can also make them with nonfat or non-dairy milk to lower the calorie count.

FAQs About Latte vs Cappuccino vs Macchiato

Do you still have a few questions about lattes vs cappuccinos vs macchiatos? I’m not surprised.

Getting the hang of these drinks can be a bit confusing.

To make it easier, I’ve put together a quick FAQ. Here’s what else you need to know about these three beverages.

Although you know what a macchiato is, this is not to be confused with a latte macchiato! Latte macchiatos are simply lattes in which the espresso is added to the cup after the steamed milk.

Latte macchiatos contain the same caffeine and calorie contents as a latte. They also contain more steamed milk as opposed to milk foam.

Can You Make Lattes With Nondairy Milk?

Yes! You can make lattes, macchiatos, or cappuccinos with any non-dairy milk you like. Most people choose to make these beverages with soy milk since this type of non-dairy milk steams up easily.

Oat milk is another popular option since it also steams up well. However, you can also use pea milk, almond milk, coconut milk, or any other type of plant-based beverage you like.

If you’ve ever visited a Starbucks, you’ve probably noticed that the macchiato is absent from their menu. Starbucks does have a drink called the latte macchiato, but this isn’t the same thing as a macchiato.

If you want to order a macchiato at Starbucks, your best bet is to order an espresso shot and ask the barista to add a dash of milk foam. They shouldn’t charge you extra for the foam, although you might get a funny look!

Macchiatos tend to be quite strong. They have an intense, dark flavor since the milk content is so low.

Cappuccinos are usually light and airy thanks to the milk foam. They’re much less intense than macchiatos but are a bit stronger than lattes.

Lattes taste creamy and silky-smooth. Since they have so much milk, they don’t tend to have such a strong coffee flavor.

So there you have it! Now you’ve got a clear idea of the differences and similarities between the latte vs cappuccino vs macchiato.

While the latte might be a soft, easy-to-drink type of coffee, the macchiato is probably better for more experienced coffee lovers.

Whichever you choose, you’re bound to find your new favorite type of coffee.

1 thought on “Latte vs Cappuccino vs Macchiato: What’s the Difference?”

Home > Comparison > Latte vs Cappuccino vs Macchiato: What’s the Difference?
About Me