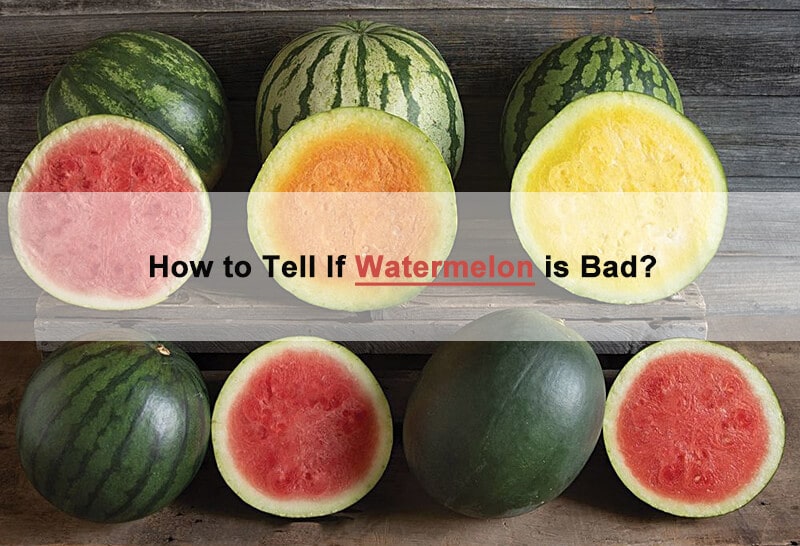 “When one has tasted watermelon, he knows what the angels eat.” — Mark Twain.

Watermelons are juicy! So, we can’t fault Mark Twain for how he felt.

Although juicy and heavenly, watermelons can go bad. If that happens, how can you tell when your watermelon is bad? Stick around for these juicy details. 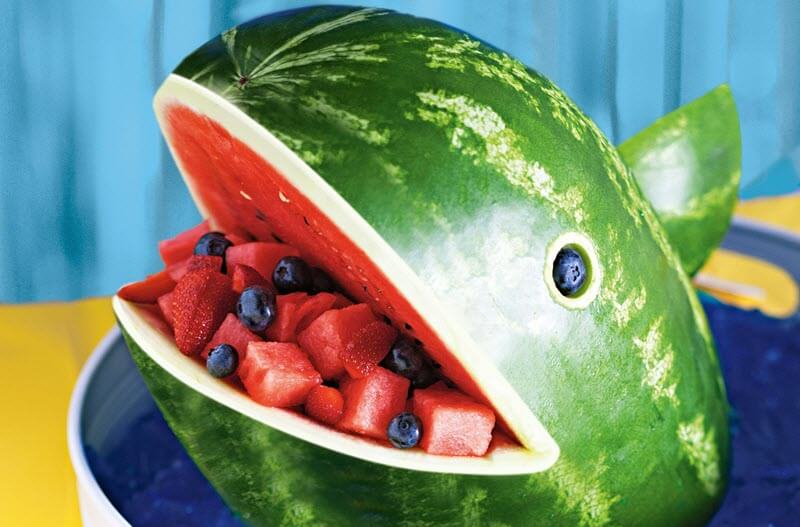 Yes. Sadly, this juicy red fruit can go bad. Watermelons are delicate fruits, so it shouldn’t surprise you that they go rancid quickly.

Unlike most fruits that have a considerable shelf life, watermelon does not. Farmers know how delicate this succulent fruit is; they only harvest this gourd when it’s near its ripening peak.

Watermelon’s short shelf life might result from water and sugar being its major component.

How Long Can Watermelon Last? 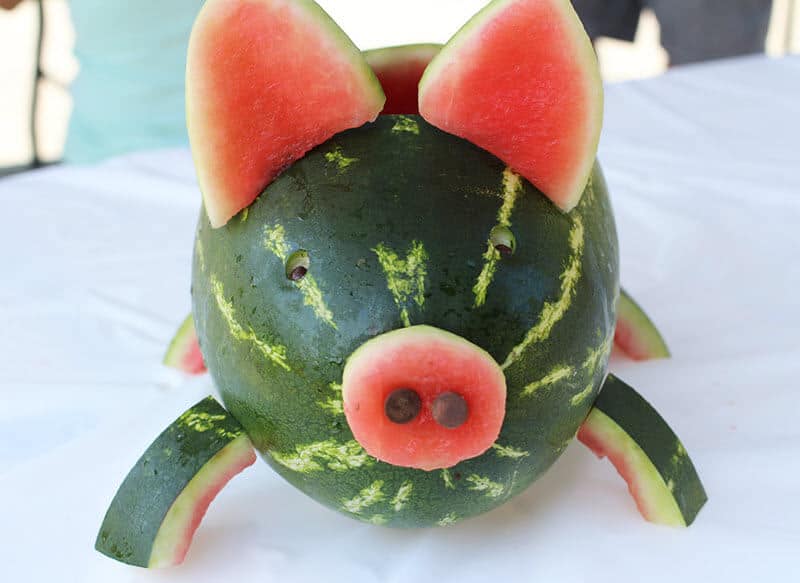 As a general rule, it’s best to keep your fruits and veggies away from heat. Heat hastens their spoilage rate. Cool and well-ventilated spaces keep them fresh.

How to Tell If Watermelon is Bad 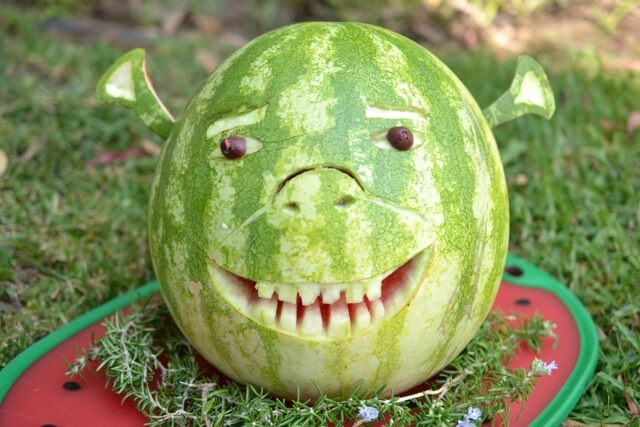 To determine if your watermelon is bad, follow these suggestions.

How to Tell If Uncut Watermelon is Bad

If you are working with uncut watermelons, look out for these signs:

Mold on the Body

These molds usually appear as dark spots on the exterior of the melons. They are pretty easy to spot.

Typically, the body of watermelons has alternating light and dark green stripes; or a consistent shade of pine green. Any color that deviates from this might indicate that your fruit is bad.

Press the gourd gently but firmly; if it feels soft instead of hard, it’s best to dispose of it.

How You Can Tell If Watermelon is Bad After Cutting

Smell the watermelon. If you perceive a bad aroma, you have to throw it away.

Take note of the color of the watermelon’s flesh. Any color that deviates from the norm is a red flag, depending on the variety.

Taste a tiny portion, if it’s sour and tangy. Then you might have to buy new melons.

If you notice a hole in the middle, it could be overripe and unsuitable for eating.

What’s more, if the watermelon flesh is shriveled and slimy, it’s going bad. Sometimes the seeds are already detached from the flesh.

The whole fruit should be smooth and firm to the touch, with no holes or bruises. You have probably picked up a dud if a cut into the fruit reveals a hollow center.

A bad watermelon typically has a sour taste. It also has a coarse and slimy texture.

How to Store Watermelon 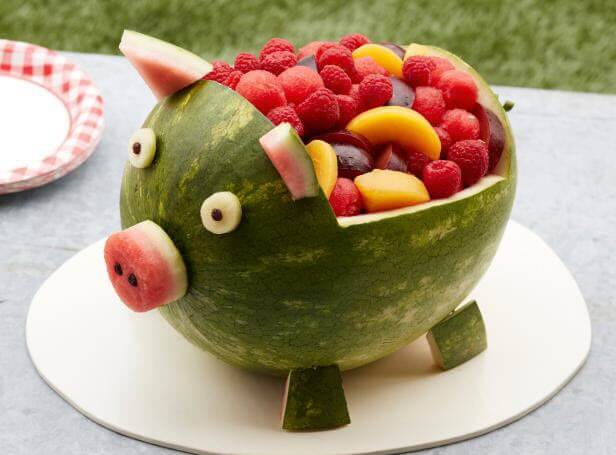 You can store watermelons in the refrigerator. But keep in mind that refrigeration reduces the nutritional benefits and affects the look after a while.

Additionally, make sure the watermelon is clean and free from bacteria and dirt. Then cut them up and store them in zip-lock bags. This method applies if you are working with watermelons and their rinds.

However, if you wish to refrigerate your watermelon slices without the rind, de-seed them before storing them in sealable bags or airtight containers. This way, you preserve the flavor and freshness.

Freezing watermelons extends their shelf life. Use an ice tray or popsicle mold to make ice cubes of blended watermelons.

You can add seasoning or blend it with other fruits to make frozen treats if you feel adventurous.

Yes, we know it sounds strange, but you can store your watermelons by Pickling.

It’s pretty straightforward; all you need to do is:

You can pickle your watermelon rind, the flesh alone, or the whole fruit.

You can store your watermelons by turning them into candied treats or jellies. This form lasts longer than storing fresh watermelons.

Let’s talk about the downside of eating an old watermelon.

Are you a lover of watermelon? Do you know all about this succulent gourd? 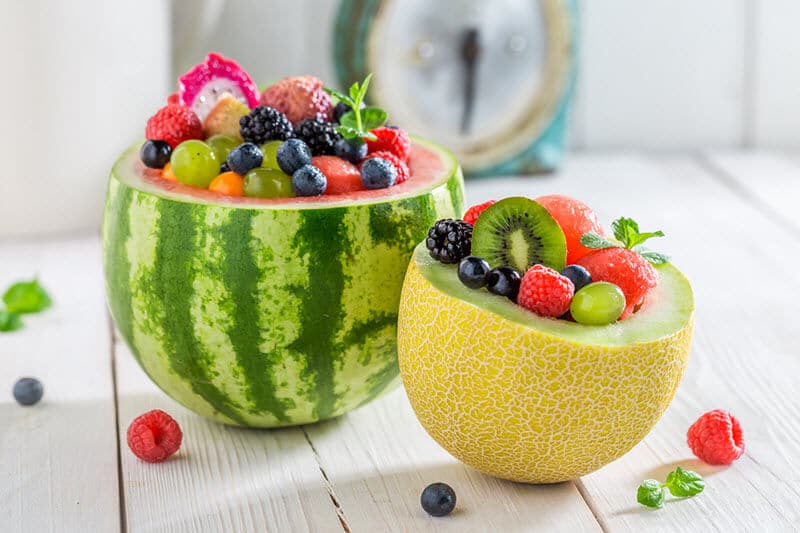 What happens if you eat old watermelon?

Like eating other rotten fruits, you run the risk of food poisoning. Signs like headache, nausea, vomiting, fatigue, and diarrhea.

When your watermelon is soft, it is an indication that it’s overripe, apart from the lack of texture and less flavor.

Overripe fruits can breed bacteria quickly as they are already showing signs of spoilage. Consuming them might lead to abdominal discomfort.

At this point, let’s answer a few questions about watermelons.

Can you freeze watermelon?

What’s the difference between red and yellow watermelon?

The compound lycopene [2] makes the difference. Red watermelon has it, but yellow watermelon doesn’t. Its also found in tomatoes.

Can you eat an unripe watermelon?

You can if you want to. However, it’s advisable not to; it isn’t as flavorful as ripe watermelons.

How to tell there is nitrate in a watermelon?

If the rind of your red watermelon is yellow instead of white, then it contains nitrates.

To test it for nitrate, cut a little piece of flesh and place it in a jar of water. If the water turns pinkish or red after some time, your watermelon has nitrates in it. It’s meant to remain the same color with water.

Juicy, succulent watermelon, just like other refreshing fruits, you can never get enough of it.

Remember to avoid watermelons that are soft and contain nitrate. Choose right and stay healthy!

Home > Info Guides > How to Tell If Cut/Uncut Watermelon is Bad? How Long Does It Last?
About Me