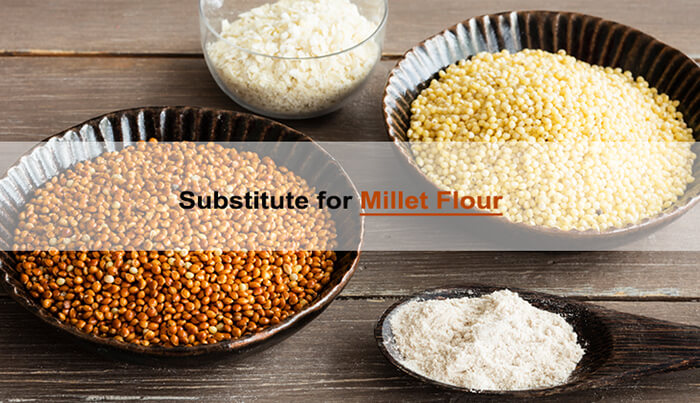 Millet flour is naturally gluten-free and nutrient-dense, making it a convenient way to give your dishes a nutritional boost.

However, if you cannot find millet flour in your local area or simply have some other options in your pantry, there is no need to fret.

There are dozens of millet flour substitutes you can use that produce near-identical results. Many of these substitutes are still nutrient-dense and gluten-free.

What is Millet Flour?

As the name suggests, millet flour is simply ground-up millet grain. It’s popular in gluten-free baking. Millet is a wheat-free grain related to grass, native to Africa and Asia. 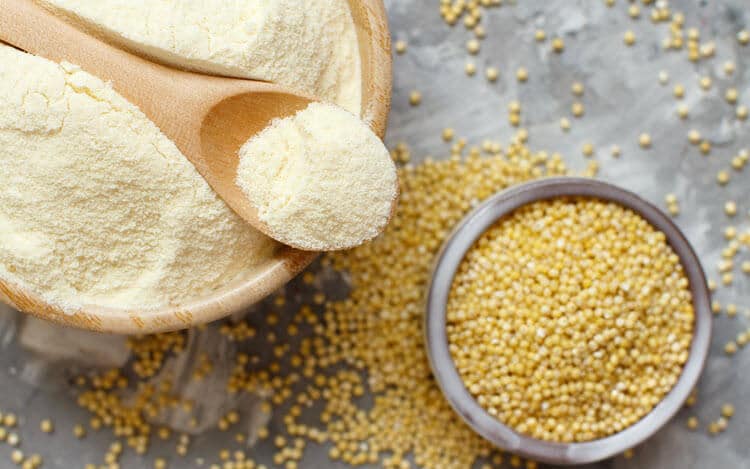 Millet flour contains more fiber, protein, and potassium than white wheat flour. It is growing popular as people look for more nutrient-dense ingredients to add to their dishes without sacrificing taste.

What Can You Substitute for Millet Flour 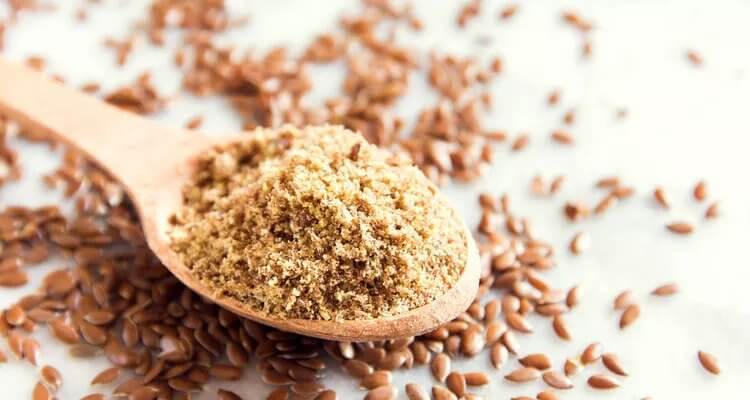 However, you cannot just replace an equal amount of millet flour with flaxseed flour. Flaxseeds don’t hold together as well as other flours do.

So when replacing millet flour with flaxseed, you need to add some more water or wet ingredients. Some people prefer to use only 25% flaxseed flour and 75% whole wheat flour for better results.

Flaxseeds are a great source of omega-3, protein, fiber, and minerals such as copper. It can be used to bake bread, muffins, and even pancakes. 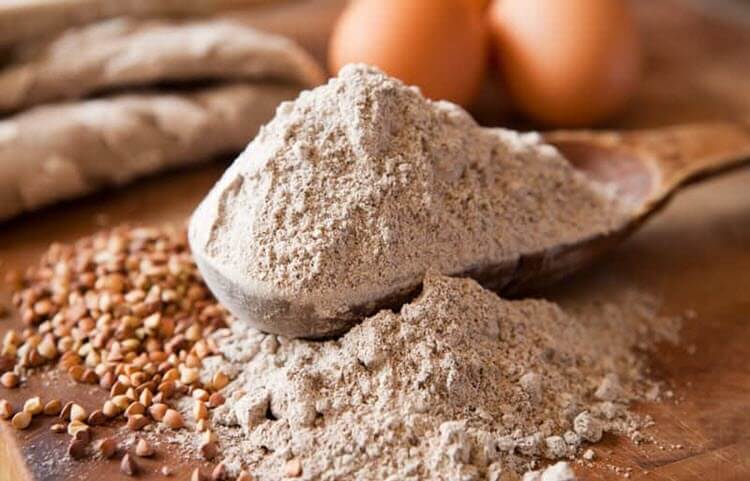 Buckwheat flour is an excellent alternative to millet flour. It is entirely gluten-free, even if the name might sound alarming. Be warned that buckwheat has a stronger, nuttier flavor than millet flour. It’s a good source of fiber and magnesium.

Buckwheat flour is good for baking hearty loaves of bread. You can also use it for cookies or pancakes. 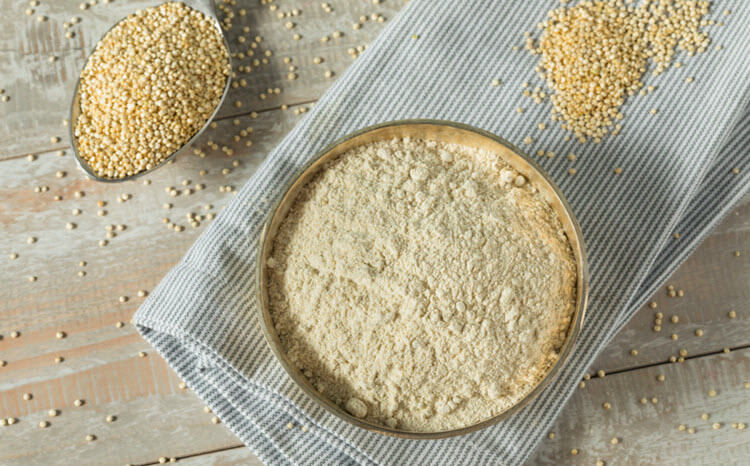 Quinoa is another popular alternative to millet flour because the consistency is almost identical.

Many people prefer to mix quinoa with another kind of flour, like wholewheat flour, as quinoa can sometimes taste bitter. If you’re baking something particularly sweet, like brownies or a cake, the bitterness will likely be masked by the sugar and chocolate.

If you’re using all-quinoa flour, you may not need to cook your dish for the full amount of time. You can take it out early and check if your food has cooked the whole way by poking a knife or fork through the center. If it comes out with some damp residue on it, it needs a few more minutes.

Keep in mind that some people might feel bloated or get a stomach ache if they consume too much quinoa. 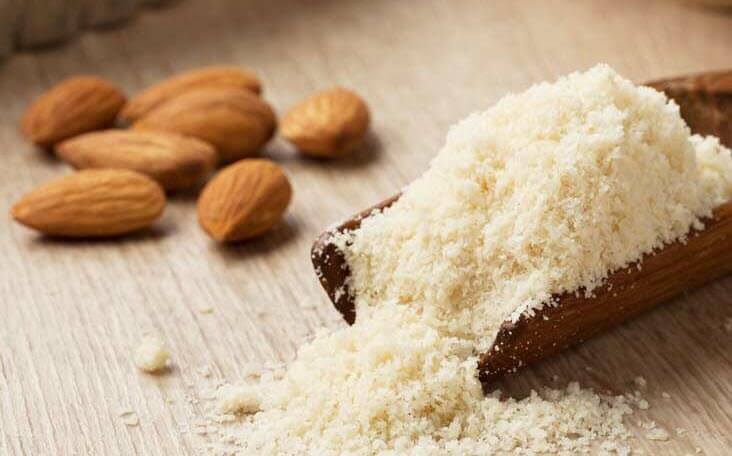 Almond flour has a much milder taste than buckwheat while still being somewhat nutty.

Almond flour – but not almond meal – can be swapped in when a recipe calls for millet flour. Almond meal has a thicker consistency and is made from raw almonds, while almond flour is made from fine peeled almonds. So, if you have a food processor, you can make your own almond flour.

Almond flour is a good source of protein and healthy fats, vitamin E, and antioxidants, so it’s easy to add extra nutrients to your diet. 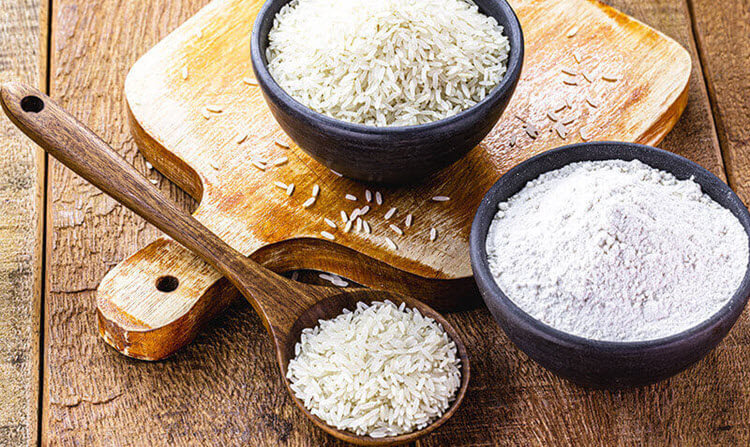 Rice flour is perfect for those who do not like strong flavors, such as buckwheat or quinoa but are looking to avoid millet. Rice flour has a neutral taste, so it will not disrupt the flavor profile of baked goods such as plain muffins and scones.

You can use either white or brown rice four. Brown rice flour is more akin to whole-wheat flour.

Some people like to mix another flour with rice flour, typically non-wheat flours. This is because rice flour does not absorb liquid ingredients as well as other flours, so it can leave baked goods with a soggy texture. 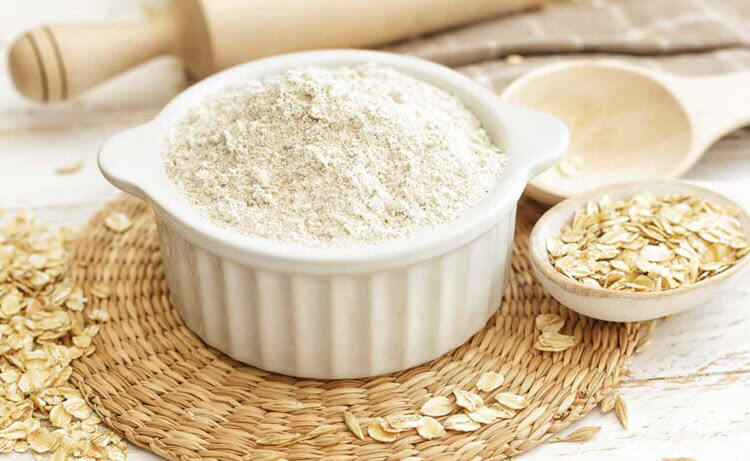 Oat flour is one of the best alternatives to millet flour.

Not only does oat flour have a neutral taste that will not interfere with your dish, but as far as millet flour substitutes go, oat flour has the most identical texture. This means you can easily sub it in without altering a recipe.

Oats are naturally gluten-free, but if you’re coeliac, ensure the packaging is marked as gluten-free to be on the safe side. You can also easily make your own oat flour by grinding whole oats in a food processor until a light powder forms. 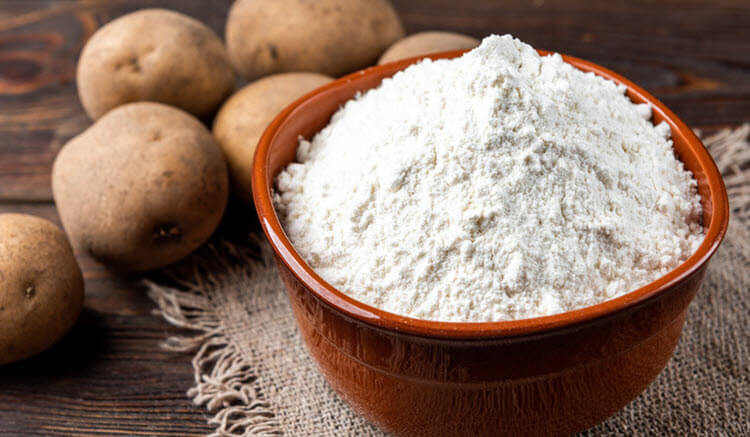 Potato might be something people are skeptical about, but your baked goods will not come out tasting like mashed potatoes!

Potato flour is made from dehydrated potatoes which have been ground into powder form. It does still taste somewhat like potatoes, but this is easily masked while cooking. While it is a good millet flour substitute, it’s best to combine it with another wheat-free flour for optimal results when baking.

It’s also one of the best gluten-free flours for thickening sauces and soups. 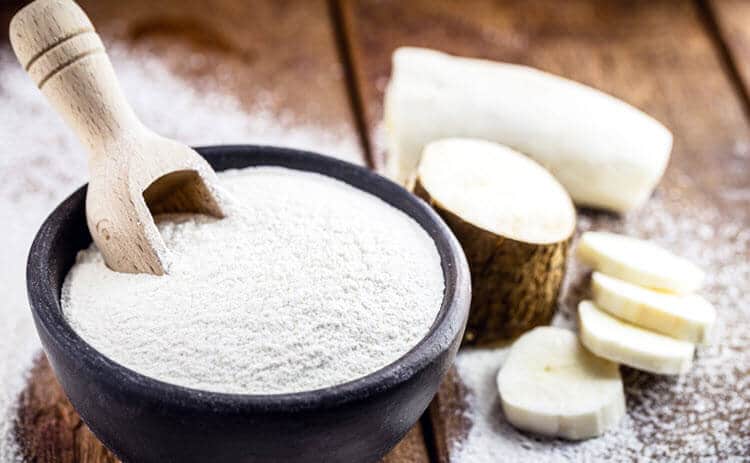 Cassava flour is made from the ground-up roots of the cassava flower. This millet flour substitute has a light, neutral flavor.

It’s also one of the easiest gluten-free flours to bake with because you can usually sub it in equal amounts of a recipe without changing anything else. 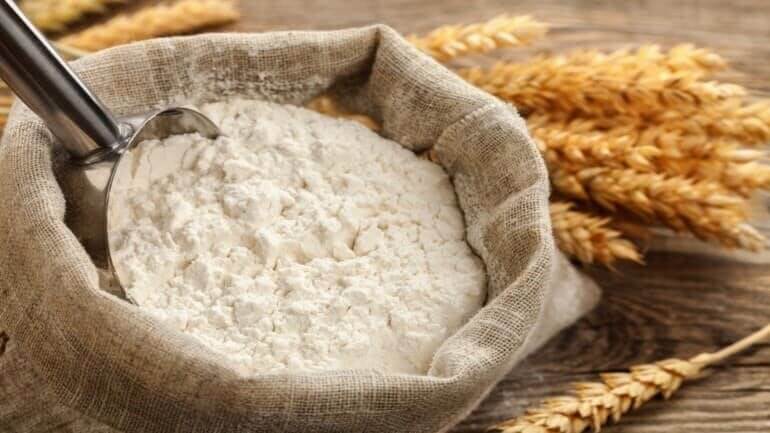 Barely flour is pretty accessible as far as millet flour substitutes go. It’s easily found in many grocery stores. It can be subbed in without needing to alter the recipe and will not overpower the dish’s flavors.

Barely is an excellent source of fiber. So, not only will you be left feeling fuller and more satisfied after using this flour but it’s good for overall gut health too. Keep in mind that barley is not gluten-free. 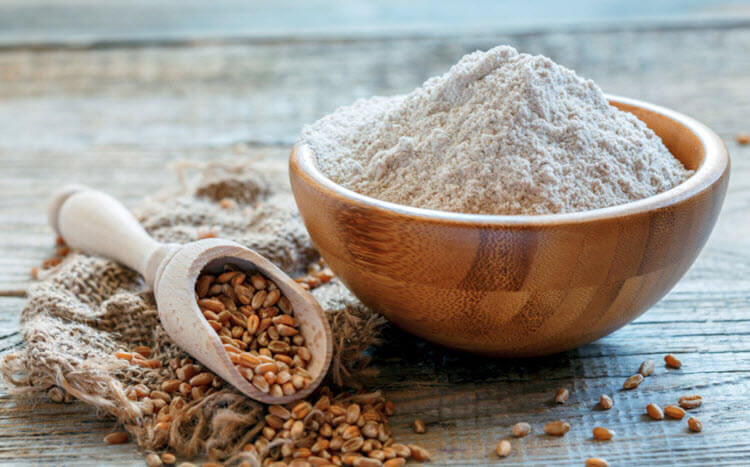 Whole wheat flour is the easiest millet flour substitute to find. You can find it in almost all grocery stores, and it is likely the most affordable option.

Whole wheat and millet have similar protein structures, so they can be interchangeable in most recipes.

Please note that whole wheat flour is not gluten-free, so this substitute is not suitable for anyone who is coeliac. 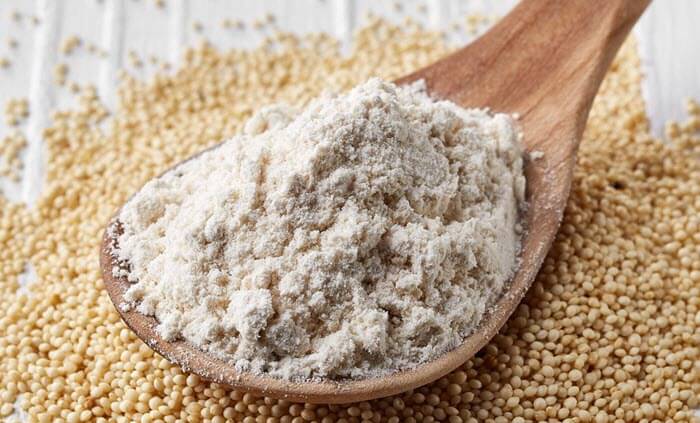 Amaranth flour has a mild earthy taste and a similar texture to millet. As it has a distinct flavor profile, it’s best suited to dishes with strong flavors of their own – such as stews or even brownies. It’s also a great source of protein.

When it comes to baking, many people will mix it with another flour or add more leavening agents, such as baking soda, egg white, or yeast, to prevent the dough from becoming too dense if the amaranth absorbs too much of the liquid ingredients. 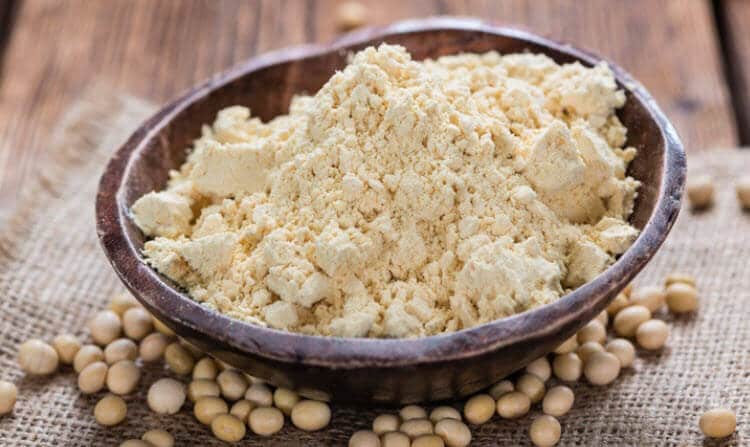 Soy flour is made from ground-up soybeans. It’s a convenient way to add extra protein, iron, and calcium to your cooking. Plus, it has a slightly sweet, nutty taste.

However, soy is a common allergen.

Millet flour is naturally gluten-free. So, coeliacs should be able to bake with it with no issues.

If you’re grinding millet yourself, ensure your equipment has been thoroughly cleared beforehand if it came into contact with gluten, as even slight cross-contamination can cause discomfort for coeliacs.

Can millet flour be substituted for all-purpose flour?

Millet flour can be substituted for all-purpose flour.

If a recipe calls for all-purpose flour, subbing in millet flour may require some tweaking. As millet flour is gluten-free, there is nothing in it to bind ingredients together when baking. So, if you are replacing all-purpose flour with millet flour, you might need to add a binding agent such as guar gum to prevent your baked goods from crumbling.

Alternatively, you can mix your millet flour with another flour such as whole wheat or barley, which both contain gluten.

Is millet flour good for you?

Millet flour is good for you. It’s an excellent source of iron. It also contains fiber, vitamins, and minerals such as potassium and calcium.

What to make with millet flour?

Millet flour is versatile. You can make sweet treats such as scones, muffins, cake, and pancakes. You can also make more savory dishes such as pizza dough, bread, and stew.

Where can I find millet flour?

Millet flour can be found in health stores, such as Wholefoods. It is also available in many Walmarts. You can also buy it online on Amazon if you cannot find it in your local stores.

While there are tons of benefits of baking and cooking with millet flour, it’s not a necessity. If you simply don’t like it or it’s not available to you, you have many other flours to choose from, most of which are still gluten-free and highly nutritious.