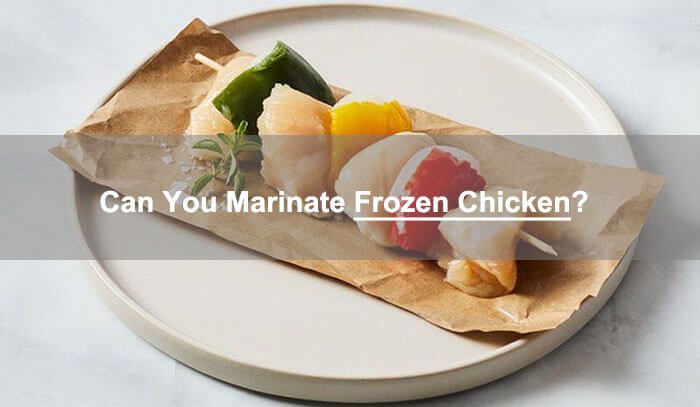 You can prepare it on its own, throw it into a curry or a soup, or go for more complex dishes—like coq au vin.

Another advantage of chicken is that it freezes well so that you can store it for extended periods. A defrosted chicken can still taste great.

But can you marinate frozen chicken? Yes. Find out how below.

Technically, it is possible to marinate frozen chicken. However, there are a few caveats to keep in mind before you go this route.

As you’ll see, just because you can do it doesn’t necessarily mean you should.

First, it’s helpful to understand why you might marinate a bird in the first place. Here are the main advantages of marinade: 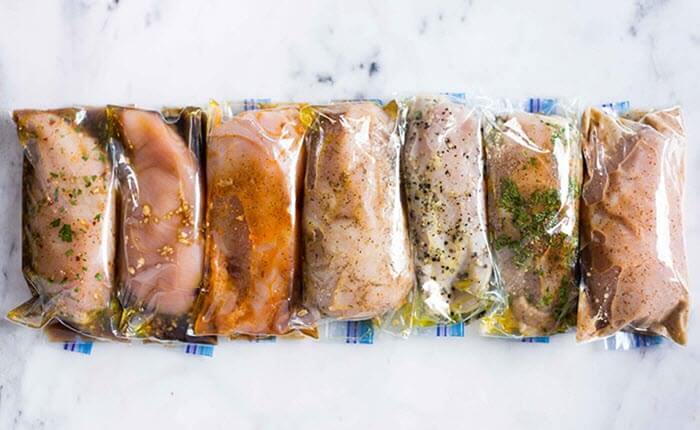 Marinating frozen chicken means you don’t get these full benefits.

A frozen bird requires defrosting. This process can cause the marinade that’s been applied to the meat to “melt” off. The water that comes off the bird as it defrosts will wash away the marinade, diminishing the flavor.

Plus, if you want to keep the chicken from thawing, you can’t effectively soak it in a marinade for a lengthy period. There is thus still a risk that the cooked chicken will be flaky and dry.

So, can you marinate frozen chicken?

Yes, it is possible. However, there are some significant drawbacks to keep in mind. If you have alternative options to marinating the chicken while it’s frozen, these may be preferable.

How to Marinate Frozen Chicken

As the above section explains, your marinade will generally pack a more potent flavor punch if you apply it to a thawed bird.

Are you determined to forge ahead and marinate a frozen chicken anyway? Read on for a quick how-to.

The first step is to prepare your marinade. Given that the defrosting process will decrease the marinade’s flavor, you may want to add more spices than usual. Prioritize more flavorful, bold spices.

Also, since the marinade will get mixed with water when the chicken defrosts, aim for a thicker marinade. Adding substances like flour or cornstarch to the marinade will help give it a thicker consistency and make it less watery, offsetting the later addition of moisture from thawing.

With your marinade prepared, you can move on to the process of actually applying it to the chicken.

People differ in how they like to apply the marinade. Some individuals prefer to use a small brush to paint it on. Others soak it directly in the marinade and use their hands to work it into the meat.

When applying marinade to a frozen chicken, you’ll probably want to use a brush.

If you soak the meat directly in the marinade, you run the risk of the bird defrosting before you want it to. You might try refrigerating the marinade first to cool it down and avoid defrosting.

The other option is to take a two-pronged approach.

You can apply the marinade to the frozen chicken and then put the meat in the bridge to thaw overnight. In the morning, the chicken should be halfway thawed. You can then reapply the marinade.

At this point, the meat will be softer and more readily soak up the marinade. Of course, this is only an option if you plan to cook the chicken on the same day.

In general, time is of the essence when marinating a frozen chicken.

The longer you keep meat at room temperatures, the more likely it is to thaw. It would help if you thus aimed to apply the marinade as quickly as possible.

There is a common misconception that you can increase the success of marinating a frozen bird by simply allowing it to soak in the sauce for longer. However, this runs a high risk of the chicken defrosting.

Still, got concerns about marinating frozen chicken? These FAQs cover the basics in a quick and easy-to-understand format.

Is It Safe to Marinate a Frozen Chicken?

One common concern when cooking chicken is the possibility of salmonella poisoning.

Marinating a frozen chicken won’t increase your risk of salmonella if you follow best practices [2] for poultry preparation.

For example, throw away any extra marinade that’s applied to an uncooked chicken.

Can You Marinate Frozen Meat Overnight?

You can technically marinate your chicken overnight.

However, the frozen chicken will defrost over this extended period, resulting in water mixing with the marinade and diluting it.

Instead, defrost the chicken overnight and apply the marinade in the morning.

Can You Freeze Marinated Chicken?

You can freeze marinated chicken, the process is actually quite simple.

You cannot refreeze already cooked chicken once it has been thawed out unless you cook it first!

Should You Defrost Chicken Before Marinating It?

While it’s possible to marinate a frozen chicken, the marinade can more easily penetrate and soak into the meat of a thawed chicken.

Further, the subsequent defrosting process will cause water to mix into the marinade, ruining the flavor.

How Can You Thaw a Chicken for Marinating?

There are many ways to defrost a chicken.

You can use a microwave, which is quick. However, this won’t work if you’re defrosting an entire chicken. Alternatives include defrosting the bird in hot water or the fridge.

A marinade has many benefits. It gives the chicken flavor, improves the texture, and reduces dryness. You should apply it to a thawed chicken—not a frozen one to take advantage of the benefits.

So, can you marinate frozen chicken?

It’s difficult for a marinade to soak into frozen meat. Plus, when you thaw the meat, the water that comes off will wash off the marinade. That said, it’s possible to marinate frozen chicken.

Home > Info Guides > Can You Marinate Frozen Chicken in Fridge or Freezer? How?
About Me