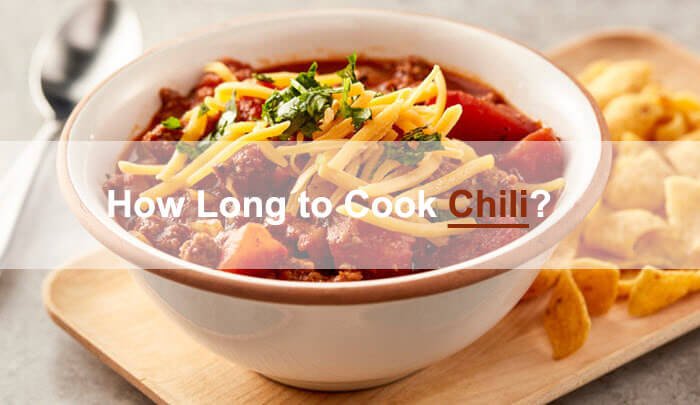 Chili is a favorite in colder months. Thick, rich, and full of complex flavor, it’s a classic for camping and game nights.

There’s some debate over how long to cook chili, and for good reason – nearly every recipe will give you a different time.

The exact amount of time you’ll need to simmer your chili for will vary depending on your method, but usually, it’s at least half an hour. Some recipes can be even father than that and still keep the slow-cooked flavor, though.

Here’s what you need to know about how long to cook chili.

How Long to Simmer/Cook Chili

Generally, you’ll want to cook your chili long enough to let the different flavors from the ingredients combine and let the meat break down and become tender. This means cooking it slowly over fairly low heat. 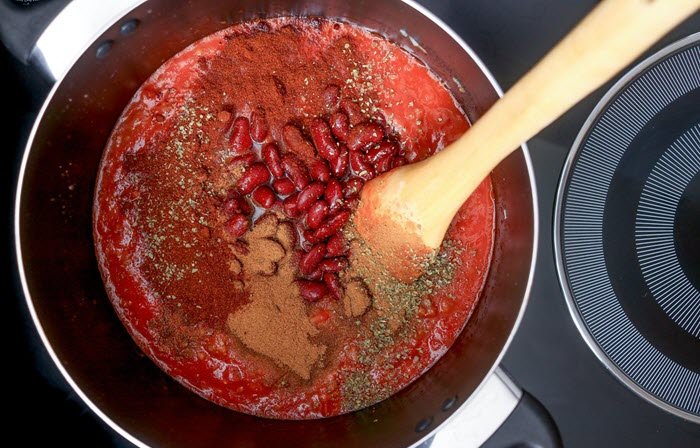 While the exact time will change depending on the cooking method, it’s enough to say that you’ll probably need at least an hour of cook time. This includes prepping and browning your meat and vegetables, as well as actual simmering time.

The three most popular methods for cooking chili are in a crock-pot, in an Instant Pot， and on the stove.

How Long to Cook Chili in a Crock-Pot

Crock-pot chili is popular for bigger gatherings and potluck dinners because it’s easy to make in large batches. It’s a set-and-forget kind of meal that makes it good for busy families as well.

The best part about crock-pot chili is that it tastes even better when reheating leftovers!

If you’re cooking chili in a crock-pot, you’ll want to cook it for quite a long time.

How long to cook chili in crock pot on low?

Set to low, you can let the chili cook for anywhere from two to eight hours. Some recipes even allow you to leave it overnight. Just be sure to add enough moisture before letting it simmer.

So, how long to cook chili in crock pot on high?

I prefer cooking on high for 2-3 hours, and then turn to low until it’s ready. This will make collagen-rich meat (like ground bee or chuck roast) become tender and fully break down.

How Long to Cook Chili in an Instant Pot

Instant Pots, a kind of pressure pot, have become very popular for their quick and efficient cooking of recipes that would normally take hours to prepare. This includes chilis.

Chili cooked in an Instant Pot can be ready in as little as 20 minutes, using the “Chili” preset on the machine. There are also a couple of longer settings (30-45 minutes) if you still want that deeper flavor.

Still, keep in mind that using an Instant Pot to make chili won’t give you the same texture and richness that truly slow-cooked chili will have.

Though the pressure can mimic it fairly well, the fact that it was cooked so quickly will always mean that the ingredients didn’t have as much time to mix and mellow out.

How Long to Cook Chili on the Stove

Stovetop chili is simple to make and has a classic taste. Though you will have to keep a closer eye on it than you would with crock-pot recipes, the control you have over the temperature is well worth it.

On the stove, chili should be simmered for up to about 45 minutes at a higher temperature. For a lower temperature to bring out richer flavors, you can simmer for up to two hours provided the lid is on.

One popular way to make stovetop chili is to simmer at a fairly high temperature, stirring often, for about fifteen minutes. Then, switch to low heat, put the lid on, and let it cook for another 30 minutes.

This mix of high and low heat brings complexity to the flavor and can help preserve the texture as well.

Want to cook beef chili? This popular video will show you how to make it tasty!

Knowing how long to cook your chili is only one step in the process. Here are the answers to some other frequently asked questions about making fantastic chili.

Should you simmer chili with the lid on?

Generally, yes. After the initial cook at a higher temperature to get rid of excess moisture, put the lid on your chili, reduce the temperature to low, and let it cook.

This keeps the chili from drying out and can prevent burning.

How long is too long to cook chili?

Cooking your chili for too long can lead to a degradation in texture when the meat and beans fall apart completely. It may also burn on the bottom.

Though again, the exact time will vary, try not to cook it for more than two hours unless the recipe you’re using specifically calls for it.

If you do end up burning your chili, transfer as much of the unburnt food as you can to a fresh pot and add more tomatoes and beans.

Simmer it just until the tomatoes and beans are warmed through, and it should taste just fine.

Do you need to pre-cook anything before putting it in the slow cooker?

You should always brown your meats before putting them into your slow cooker.

While they will cook fully while the dish is simmering, browning it ahead of time gives it a much better texture and overall flavor.

It’s a good idea to soften and brown your vegetables before letting the chili cook, as well. This is especially true of onions, which can add an amazing depth of flavor when lightly caramelized.

Also, never put raw red kidney beans in your chili. These can be toxic if undercooked, so it’s best to either boil them yourself ahead of making the chili or use pre-cooked beans.

If you are using pre-cooked beans, make sure to drain and rinse them before adding them to the chili so they don’t thin out the mixture.

How long to reheat chili in microwave?

To make sure that you get the most out of your chili, let them cool for at least 1 minute after microwaving. If it still isn’t warm enough, reheat for an additional 30 seconds on high until ready to eat!

Chili can be a fun dish to make. No matter how or why you’re cooking it, whether you’re preparing it for a big gathering or throwing together a mid-week meal for your family, you can still enjoy the process.

Don’t be afraid to take your time with chili! The point of this dish is to let flavors meld slowly over time into something thick and rich. Experiment with your ingredients and your seasoning to find the combination that you like the best.

Home > Info Guides > How Long to Cook Chili in Crock-Pot, Instant Pot or on Stove
About Me