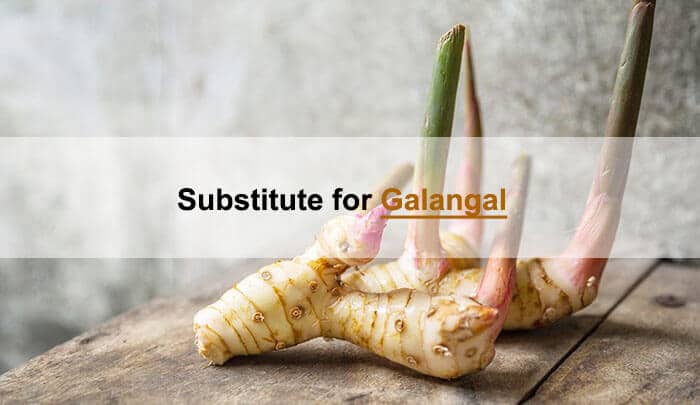 Galangal is a popular ingredient in Asian cuisine, but it can be difficult to find in the United States. If you are looking for a substitute for galangal, then look no further.

This post will introduce the top 14 easy-to-get galangal replacements for your recipe.

Similar Galangal Substitutes for Your Recipe 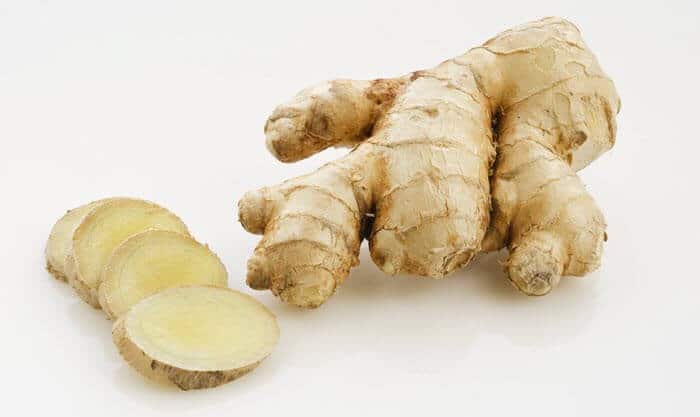 Fresh ginger root is one of the best and most accessible galangal replacements. As a cousin to galangal, ginger root is similar in shape and robust yet mildly sweet in flavor.

Ginger is spicier than galangal and also lacks the zestiness, so adding some lime zest, lemongrass, or lemon juice to taste can add that extra tang.

Use a ratio of 2:1 galangal to ginger. For example, if the recipe calls for one tablespoon of galangal, use half a tablespoon of fresh ginger root. 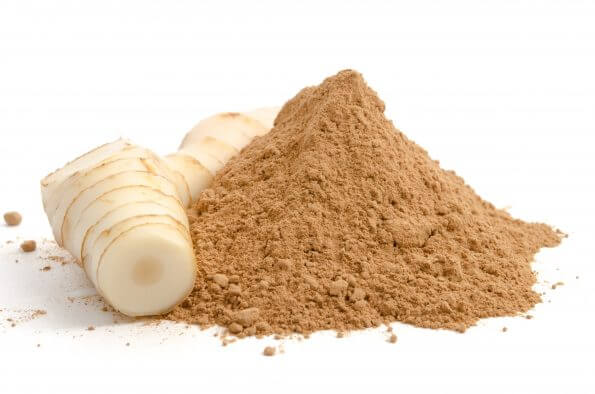 Many Chinese, Thai, and Vietnamese groceries carry galangal powder as an alternative to fresh galangal.

Since the powder keeps longer in your spice cupboard, it is a great galangal alternative you can stock up on. 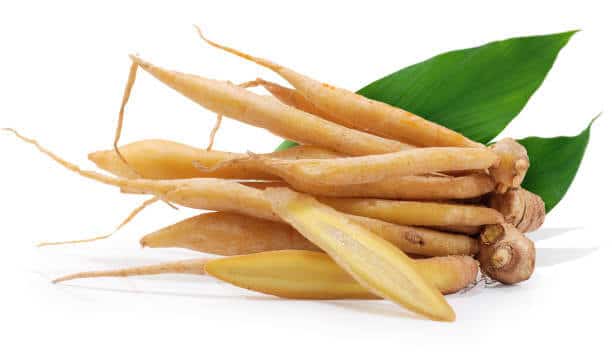 Fingerroot is another cousin of galangal, also related to ginger.

Fingerroot makes for a great galangal substitute; however, it is not as readily found as ginger is. Fingerroot is milder than ginger yet spicier than galangal.

Fingerroot can be used at a ratio of 1:1 with galangal. Start off using slightly less fingerroot than the recipe indicates. You can always add a dash more if you feel it needs it. 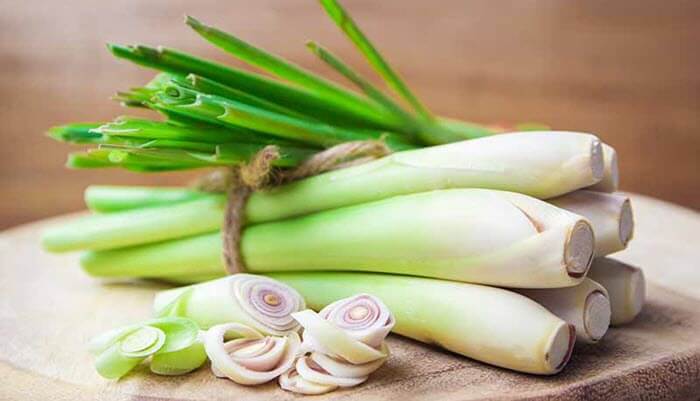 Lemongrass is another common substitute for galangal. It is similar in flavor to galangal in that it has a citrus flavor mixed with a robust ginger-like spice.

To get the full effect of lemongrass as galangal, chop sections into big pieces you can sink your teeth into.

Use a ratio of 1:1.5 of galangal to lemongrass. For example, if the recipe asks for one tablespoon of fresh galangal, substitute it with one and a half tablespoons of chopped lemongrass. 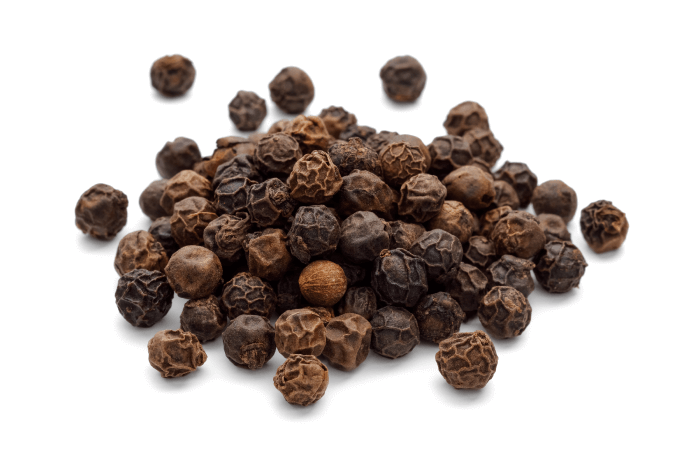 Everyone has experienced the warm heat of biting into unground black pepper. Just like galangal, white and black pepper offer that touch of spice that adds flavor to any dish.

Pepper is an easy galangal alternative that is already a staple in your kitchen.

Add white or black pepper to any recipe calling for galangal to taste. 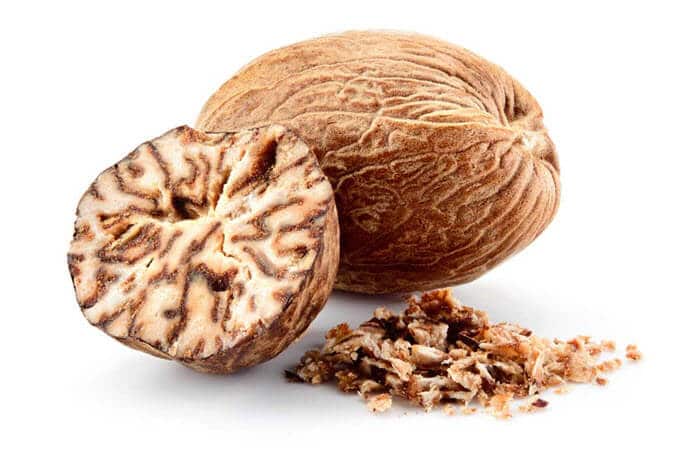 Did you know that the nutmeg tree is the only plant that produces two spices [1]? Mace is a unique spice that is derived from the red coating of the nutmeg seed.

Though its taste profile may be similar to nutmeg, it is a bit smoother than its counterpart.

We all know nutmeg to be sweet with a spicy kick making it perfect for holiday dishes, but the softer and less sweet taste of mace makes it a great galangal replacement for South Asian cuisine when combined with other spices such as cinnamon.

Though mace can be used either whole or ground, ground mace truly accentuates the essential oils that add maximum flavor to your dish.

To substitute mace for galangal, start by adding ¼ teaspoon and gradually increasing the amount to taste. 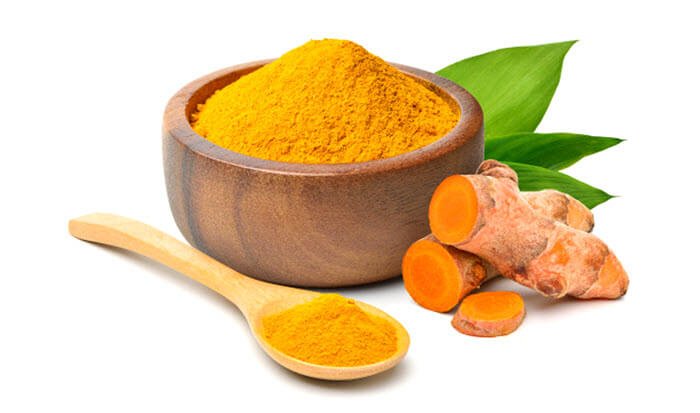 Turmeric is another cousin of ginger and fingerroot. Aside from its several health benefits [2], it is a galangal substitute that can be fresh or powdered.

With a pungent yet earthy flavor, it makes for an alternative to galangal that also adds a distinct yellow color to your dish.

Use a ratio of 1:3 of galangal to turmeric. Or three tablespoons of turmeric for every one tablespoon the recipe calls for. 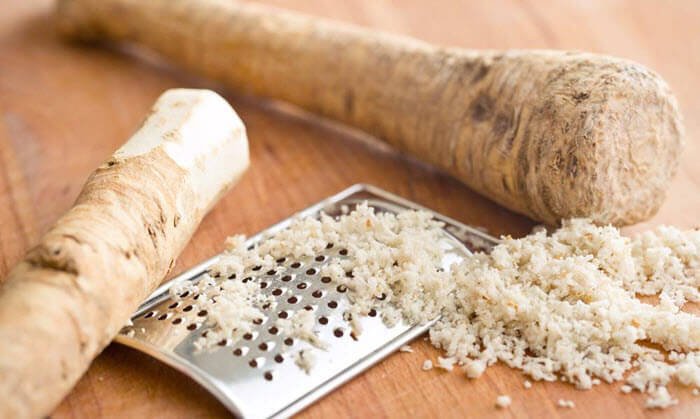 Having a comparable taste and smell, grated horseradish and galangal are interchangeable for your home cooking.

If you don’t have fresh horseradish handy, most wasabi paste is made from horseradish. Ginger is a common substitute for horseradish, so feel free to experiment with both if you have them stocked.

Similar to ginger, use a lesser amount of your galangal alternative than what your recipe is asking for. Go for a 2:1 ratio and taste your dish to see how the flavor suits you. 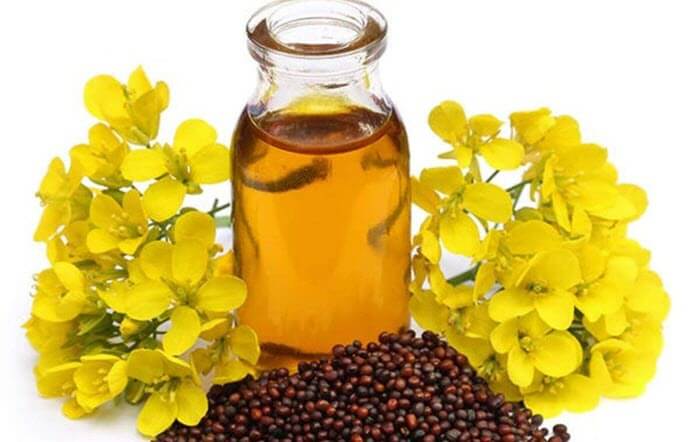 Mustard or mustard oil can be used as a substitute for galangal to give Thai cooking a deeper flavor and sweet taste.

You can use white, black, or brown mustard seeds, mustard oil, or if you are in a bind, regular mustard. Mustard works well for pickled dishes that call for galangal.

Add mustard seed oil to any recipe calling for galangal to taste. 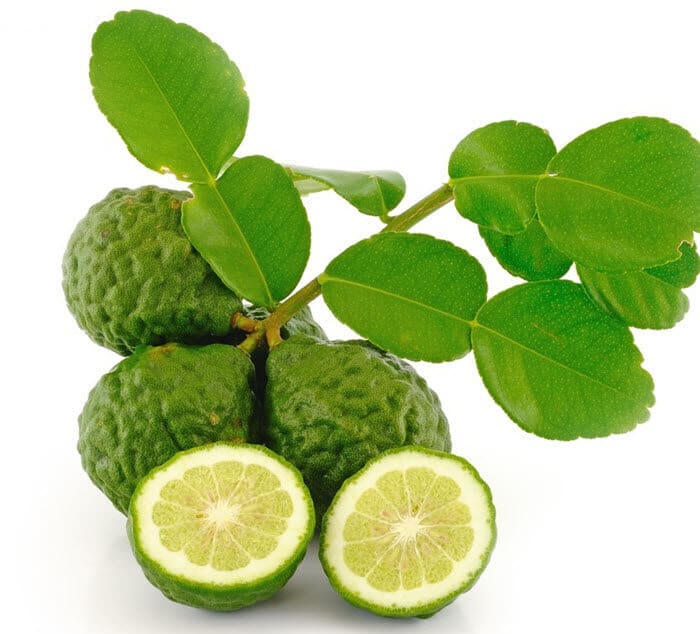 Kaffir Lime leaves are commonly found in Thai cuisine and are good to have on hand whether you need a galangal replacement or not.

True to their name, kaffir lime leaves are leaves with a citrus flavor that adds an extra boost of zest to your recipe.

Treat them as you would bay leaves and let them infuse your Thai soups and curries with their spiced citrus flavor, then remove them before serving.

Add kaffir lime leaves gradually to any recipe calling for galangal and taste throughout the cooking process for your desired strength of flavor.

Don’t worry if you can’t find this option, you can still try one of its alternatives for your recipe. 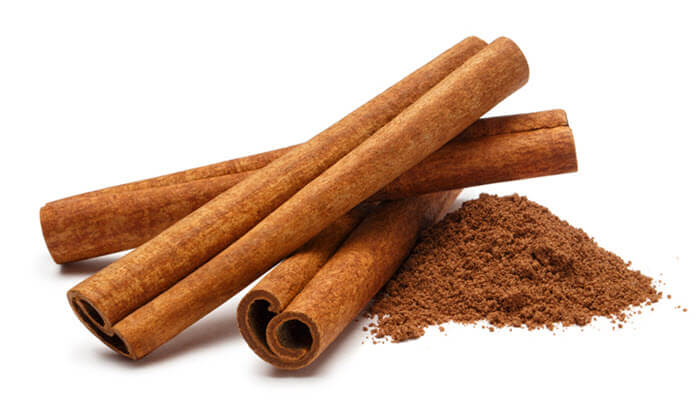 Cinnamon adds a warm spice to dishes and can be used as an alternative to galangal, especially in addition to other ingredients like mace or ginger.

Mace, ginger, and cinnamon work together to recreate the flavor of galangal in case you don’t have the real thing close.

Add cinnamon to any recipe calling for galangal to taste. Add in mace or ginger to taste if you want a spicier flavor. 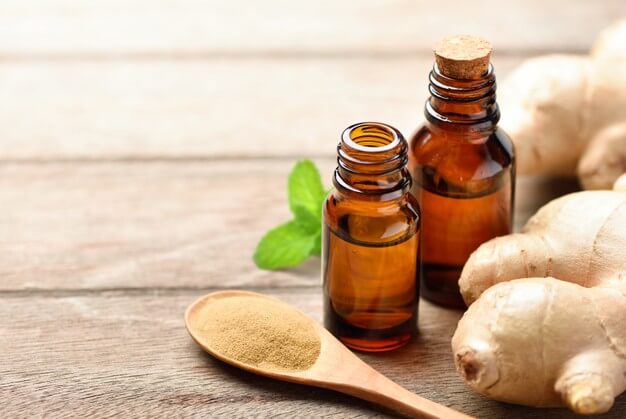 Ginger powder and cooking-grade ginger oil can be used as a galangal substitute if fresh galangal or ginger are not stocked in your kitchen.

Use a ratio of 1:⅛ fresh galangal to ginger powder and adjust to taste. If the recipe calls for one teaspoon of galangal, substitute it with one-eighth of a teaspoon of ginger root powder.

If using cooking-grade ginger oil, it’s important to remember that it is potent and should be added one drop at a time to taste instead of fresh galangal. 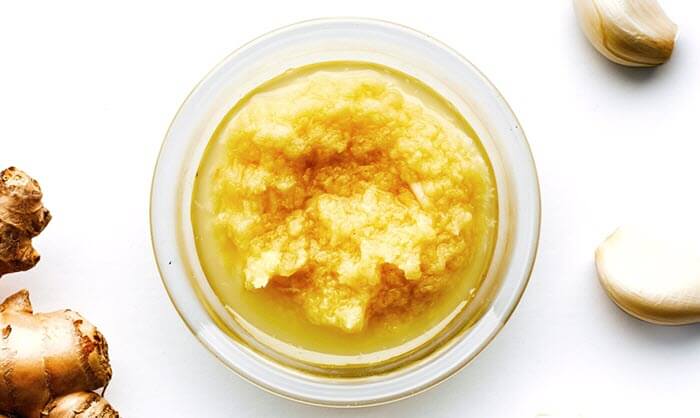 If you do get your hands on some fresh galangal, you can make a paste and add the spices you most prefer to eat galangal with.

You can substitute an inch of fresh galangal with one teaspoon of galangal paste.

Galangal is a plant in the family Zingiberaceae, and is closely related to ginger. The rhizome of greater galangal has a sharp taste and odor similar to that of ginger but with nuances of lemon and pine needles. 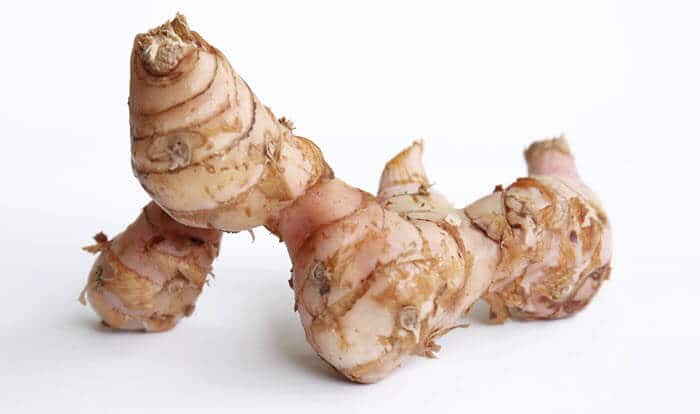 Lesser Galangal is a flowering plant in the family Zingiberaceae, native to China, Laos, and Thailand. It is not as commonly used as galangal or ginger but is still valued for its medicinal properties. The rhizomes have a more acrid taste than those of galangal and a characteristic camphoraceous odor.

Galangal is used in cooking throughout Southeast Asia, where it is a common ingredient in curries. It is also used as an herbal remedy in traditional Chinese medicine. Both greater and lesser galangal are sometimes used as alternatives to ginger in food preparations. In addition, the essential oil of both plants has been used in perfumery.

Can I substitute dried galangal for fresh?

Yes, you can! Use 1½ teaspoons of dried galangal to substitute for 1 tablespoon chopped fresh galangal.

Where to buy galangal?

Galangal is a rhizome that resembles ginger in both appearance and taste. The root can be found fresh or dried in most Asian markets, and it can also be ordered online.

Is galangal and ginger the same?

Although they both belong to the Zingiberaceae botanical family, and have a peppery flavor and an aromatic smell, they are different.

Galangal is more often used in Asian dishes rather than in Western cuisines. It has a strong flavor which some describe as being similar to liquorice, lemon or pine. It is also known as Thai ginger.

The galangal rhizome can be cooked but it should always be used sparingly because of its intense flavor. You can cut the root into thin slices, mince it or grate it just before using it in order to release its flavor.

Ginger is the most popular member of the Zingiberaceae family. It is a very versatile spice with a warm, peppery flavor that can be used fresh or dried. Ginger is one of the main ingredients in many Asian dishes, but it’s also popular in Western cuisine.

The ginger rhizome can be eaten fresh, cooked, or dried. When eaten fresh, it has a crunchy texture and a slightly sweet, peppery flavor. You can slice it, grate it or mince it before using. If you’re cooking with ginger, the best way to release its flavor is to steep it in hot liquid for a few minutes.

So they are not the same. But they are both very good spices to have in your kitchen.

Galangal is a rhizome that is used as a spice in Thai cuisine. Don’t be panic if you can’t find it in your kitchen, we’ve listed the top 13 substitutes for it.

Just use any of them for your dishes now! Enjoy!

If you have any questions about this, don’t hesitate to leave a comment below.