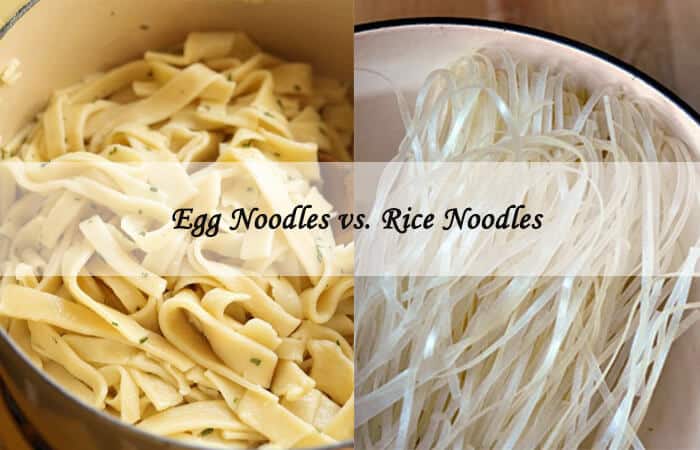 Noodles are an amazingly versatile food people have enjoyed for thousands of years.

However, when you’re walking down the aisle looking at all the different types of noodles, it’s hard to know if you should choose egg noodles or rice noodles.

So today, we’re chatting about egg noodles and rice noodles, what the differences are between the two noodles, and how to choose which one is right for you.

Plus, you’ll come away with two amazing recipes that feature either egg noodles or rice noodles. 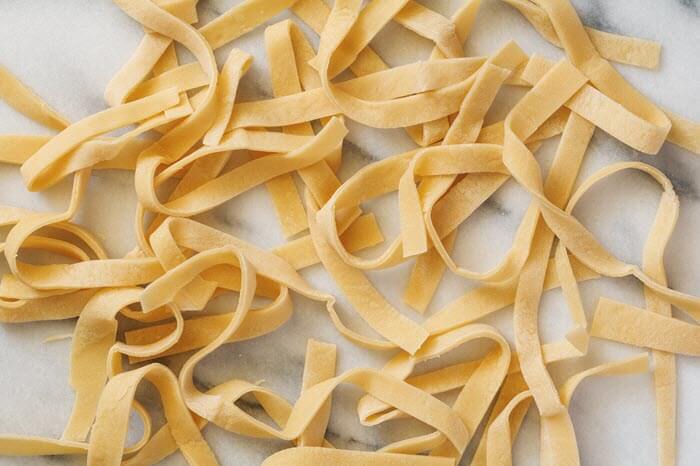 Egg noodles are made by mixing and then kneading eggs and flour into an unleavened dough. Then the dough is rolled flat and cut into various strips and shapes. It can be dried for future use or cooked and eaten fresh.

Egg noodles absorb flavors well and are a common addition to soups, risottos, and pasta salads.

Here is a popular recipe that use egg noodles.

1. In boiling water, add your noodles until desired texture.

2. Meanwhile, toss the chicken with paprika, ½ teaspoon salt, and ¼ teaspoon pepper. Then heat the oil over medium-high heat in a Dutch oven. Saute the chicken in batches until it's brown, taking about 2-3 minutes per batch. Remove from pan and set aside.

3. Using the same pan, saute the mushrooms in butter until lightly brown, about 4-5 minutes. Add the saute and onion until it's softened, which will take 3-4 minutes.

4. Now add the garlic. You will need to cook and stir for 1 minute.

5. Pour wine into the pan. Scrape the bottom with your spoon to loosen browned bits. Add stock, Worcestershire sauce, and mustard. Allow the mixture to cook until the liquid is reduced by half, about 10-12 minutes.

6. Stir in the chicken, turn the heat down to medium-low, and cook uncovered until the chicken is no longer pink.

7. Stir in the creme fraiche or sour cream, parsley, and the remaining salt and pepper before removing the pan from the heat. Stir in the noodles.

Cream Fraiche is similar to sour cream but slightly thinner. The taste is richer but not as sour as sour cream.

The recipe was tested with chardonnay wine. 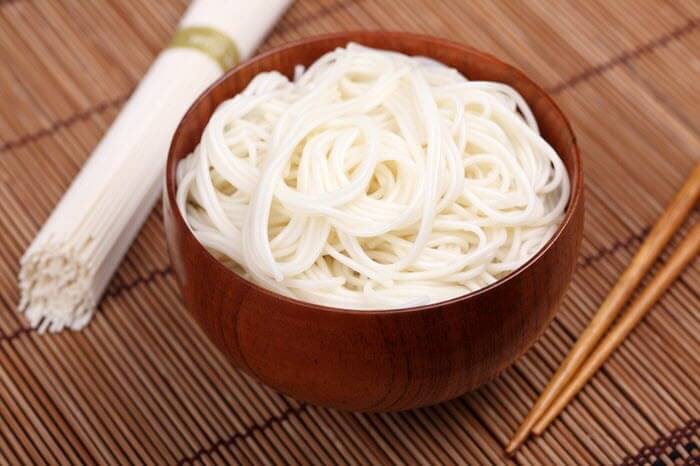 Rice noodles are made by mixing and kneading rice flour and water. Once the dough is made, it’s rolled flat and cut into the needed shapes and sizes.

Rice noodles are commonly used in Vietnamese cuisine, but they may also be found in Chinese cuisine and other Southeast Asian cuisines such as Thai and Cambodian food.

Here is a popular recipe that call for rice noodles.

1. Combine the marinade ingredients except for pork and noodles in a large shallow dish. Place the pork in the marinade and turn it over to ensure it's coated. Cover the bowl and refrigerate the pork for 3 hours or overnight.

2. Drain the pork and discard the marinade. Then lightly oil the grill rack. Now you will grill the pork covered over medium heat for about 1-2 minutes on each side. Make sure the pork reaches a temperature of 145°.

3. Follow the directions on the package to cook the noodles. Drain the noodles and rinse them under running cold water.

4. In a small bowl, whisk the dressing ingredients together.

5. Layout 6 bowls and divide the rice noodles among them. Arrange the salad vegetables, herbs, and pork over the noodles. Drizzle with dressing and toss to combine.

The oil from hot peppers can burn your skin. Consider wearing protective gloves when chopping hot peppers and avoid touching your face.

There are several differences between egg noodles and rice noodles, including the ingredients, nutritional values, and the taste of the noodles.

Egg noodles are made with wheat flour, eggs, and water with a small amount of salt. The dough is kneaded before rolled flat and cut into the desired noodle shapes.

Rice noodles do not include wheat flour or animal products as they’re made with rice flour and water. Tapioca or cornstarch may be added to improve the texture of the noodles.

Rice noodles are an excellent choice for vegans and people who are gluten intolerant as the noodles don’t contain any wheat or animal products.

Because egg noodles contain more protein than rice noodles, they will cook faster than other types of noodles, such as spaghetti.

Rice noodles stick together if cooked incorrectly, so add plenty of olive oil or butter to keep them separate while cooking.

Egg noodles need to be boiled for 5-7 minutes, although the time will vary depending upon the thickness of the noodle and the brand. 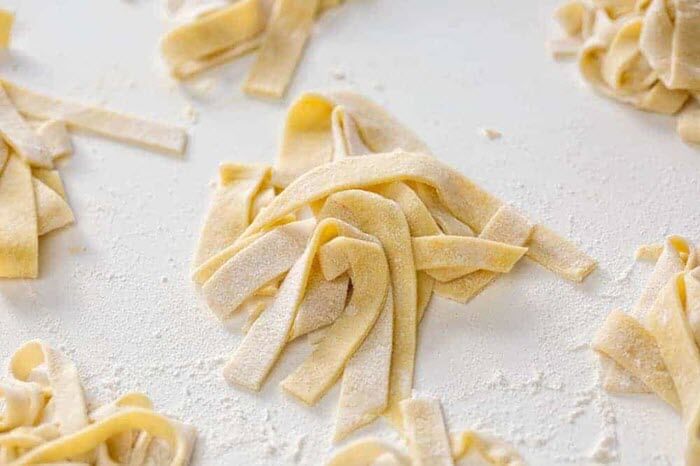 You don’t need to boil rice noodles. Instead, soak them in hot water for 1-2 minutes. Check the instructions for the thickness and brand of noodles.

Egg noodles absorb flavors and have a chewy texture, while rice noodles have a subtle flavor with a mild rice taste.

Rice noodles tend to be crispier than egg noodles, making them an excellent addition to soups, stir-fries, and salads. Egg noodles are often used in soups, pasta salads, and risottos.

For this reason,  rice noodles don’t contain gluten, so they’re safe for people with celiac disease, gluten intolerance, or allergies.

Egg noodles can be a problem for people with these conditions because they contain gluten.

Rice noodles have fewer calories than egg noodles, so if you wish to watch your calories, rice noodles are the better choice.

However, the glycemic index score of egg noodles is 40 compared to that of rice noodles which is 61.

A lower glycemic index means the food is less likely to suddenly cause blood sugar levels to increase. 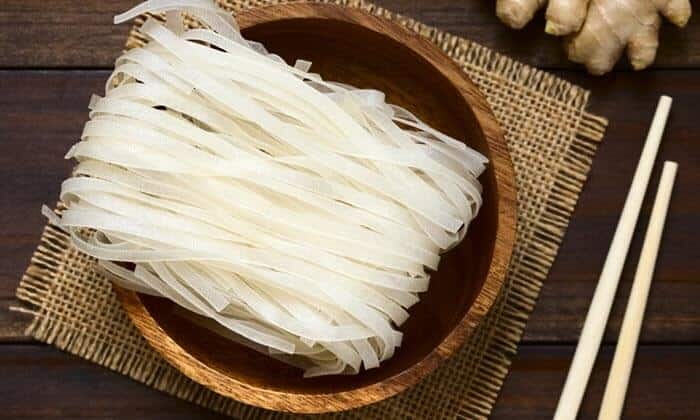 Rice noodles are typically used in Asian cooking to replace wheat-based pasta. They are made from rice flour and water.

Rice noodles don’t include wheat or animal products. They’re an excellent choice if someone eating the noodles is gluten intolerant or vegan.

A person with diabetes may also wish to use rice noodles because they’re high in the carbohydrates that the body needs to transform into energy.

Egg noodles are made from flour and eggs. They have a soft texture that makes them suitable for soups, stews, and other dishes that require a very soft noodle.

Egg noodles are also easy to cook — just boil water in a pot until it boils, throw in your egg noodles, then let them sit for about 8-10 minutes (depending on how soft you like your noodles).

A vegetarian may prefer egg noodles as they have more protein, a richer taste, and are more filling.

FAQs About Rice and Egg Noodles

What has less carbs, rice noodles or egg noodles?

Can you substitute egg noodles for rice noodles?

What is healthier rice noodle or egg noodle?

Rice noodles have fewer calories, while egg noodles have more protein and fat. Ultimately, the healthier choice for you will depend upon your nutritional needs.

Yes, egg noodles are an acceptable substitute for rice noodles when making pad thai. Make sure that you cook the egg noodles to al dente.

Substitute the cooked egg noodles when the recipe instructs you to add rice noodles.

Egg noodles and rice noodles are both popular dishes in Asian cuisine. They are made from different ingredients and provide different textures in the finished dish.

The choice of noodles you pick will depend on the texture you’re looking for and what shies you plan on preparing.

Home > Comparison > Egg Noodles vs. Rice Noodles: 6 Key Differences to Know
About Me