If you encountered a great deal on pickles at your grocery store, you might be wondering—do pickles need to be refrigerated?

Most unopened pickles don’t need refrigeration. However, it’s best to refrigerate unpasteurized pickles regardless of whether you opened the jar since it will slow down the fermentation process.

Read on for other must-know tips about refrigerating your pickles.

The Benefits of Refrigerating Pickles

Some styles of pickle preparation can go without refrigeration depending on whether the jar is already open.

However, in almost all cases, refrigeration is beneficial, especially if you won’t be consuming your pickles for a while.

The benefits of refrigerating pickles include:

Do Pickles Have to be Refrigerated After Opening? 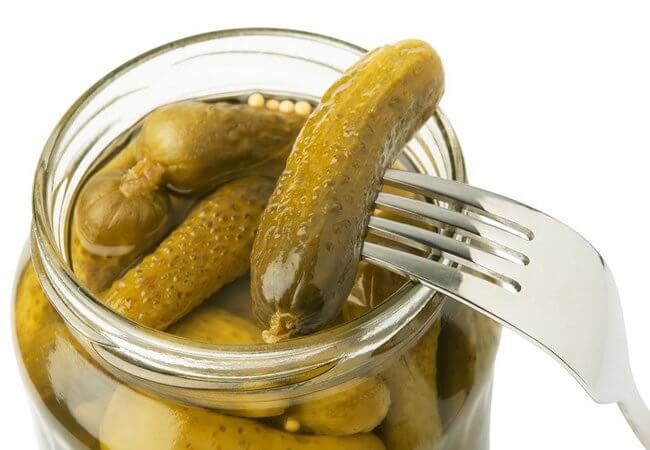 You should always refrigerate your pickles after opening them. To do so, leave your pickles in the jar they came in and ensure you seal the lid tightly. Alternatively, you can transfer them into another airtight container.

The exception to this are fermented pickles that come in barrels. These pickles don’t need refrigeration, and they contain more gut-healthy bacteria [1]. However, they have a much shorter shelf-life (usually up to a few months) since the fermentation process never ends.

In contrast, store-bought jarred pickles almost always undergo pasteurization. That puts a stop to the fermentation process. As a result, these pickles have a much longer shelf life without refrigeration.

Determining Whether to Refrigerate Pickles

When you buy a jar of pickles from the grocery store, the best option is to follow their storage method.

Most of the time, you’ll encounter pickle jars in the canned, non-refrigerated section of a supermarket. But sometimes, they put pickles in the refrigerator section. In that case, you can assume the company didn’t pasteurize the refrigerated pickles.

In either case, once you open your can of pickles, it’s best practice to keep them refrigerated so that you extend their shelf life.

Although it’s okay to store many types of pickles on a shelf, you need to ensure they have the right conditions to maximize their shelf life.

The ideal shelf conditions for pickles include:

Of course, you also need to ensure that your pickle jars have tightly sealed lids. Otherwise, air and bacteria will enter, spoiling your pickles.

How to Store Pickles

Now that you know the answer to the question, “Do pickles need to be refrigerated?” let’s examine the three ways you can purchase and store pickles. 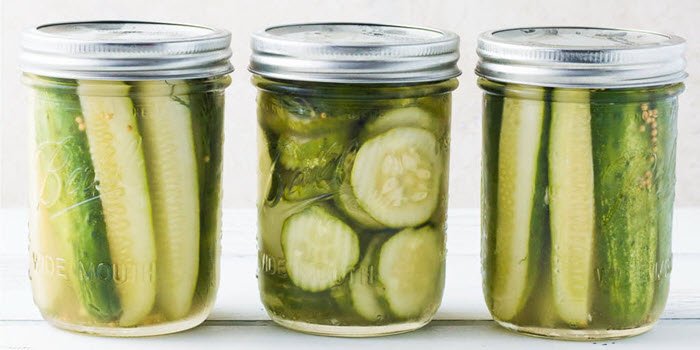 Storing pickles in jars is the most common way to keep them.

Whether you make pickles at home or purchase them from the grocery store, glass jars are the go-to method.

As long as a pickle jar has a tight seal, you can expect it to have a long shelf life before you open it without refrigeration.

That said, you can’t expect to store your pickle jars in 80-degree weather without it impacting them when you go to use them a year later.

So, you should keep unrefrigerated pickle jars at temperatures of no higher than 50 degrees Fahrenheit. 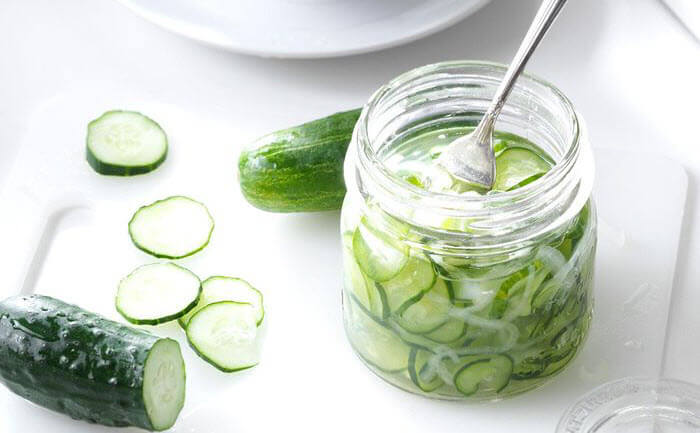 Pickles have a long shelf life in jars. But if you have more jars than you can consume, freezing them is a great option.

Before you freeze your pickles, make sure you know how you’ll use them when you defrost them. That’s because frozen pickles lose their crunch, so it’s best to include them in hot dishes where their texture isn’t as important.

You’ll need to put a little legwork into freezing pickles, as you’ll first need to drain the brine and dry the pickles as well as possible. Then place them in freezer bags.

If you don’t want the pickles sticking together, you can flash freeze them by spreading them out on a cookie sheet and placing them in the freezer for about 20 minutes before bagging them. 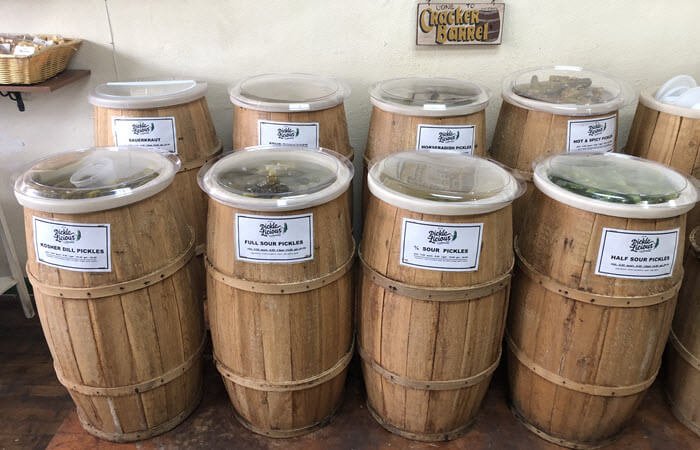 Storing pickles in barrels dates back to the late 1800s [2] when Jewish immigrants brought kosher dill pickles to the United States.

Jews would push carts of pickles across the streets in New York City. They became such a hit that today you can still encounter many Jewish delis serving pickles from barrels.

Pickles in barrels don’t last nearly as long as jarred pickles because the fermentation process doesn’t stop. The lifespan of pickles from barrels is about a few months. At that point, the pickles take on a strong, sour taste.

If you eat pickles from a barrel, you’ll also notice that they have a softer texture, especially the older the pickle gets. The fermentation process also causes them to develop mucus.

How to Tell if Your Pickles Went Bad

Since jarred pickles have such a long shelf life, you might wonder if they have an eternal shelf life like honey [3].

So, do pickles go bad?

Luckily, it’s easy to tell if you have a bad jar of pickles on your hands. Signs to look for include:

You also might notice that pickles sticking up out of the brine have mold on them. However, this isn’t necessarily an indication that your pickles are bad. Instead, that’s a natural reaction when pickles mix with air.

So, if you notice a moldy top of a pickle but you don’t see any of the other signs listed here that your pickles are bad, feel free to throw out the moldy pickle and enjoy munching on the rest of the non-moldy ones in the jar.

Easiest Way to Make Your Own Pickles

Pickles are an excellent way to add flavor and zing to dishes. It can be made in a variety of ways, but the most popular is with cucumbers.

This video will show you how to make pickles from scratch, so you know what’s going into your food!

How long do pickles last once opened?

Pickles are typically safe for up to one week after they have been opened, but the best way to be sure is through careful observation of the jar or container that is used.

The top layer may show signs of mold and other bacteria growth within these days. Signs include bubbles on top, a white film on the surface of the brine, and any unpleasant odors coming from inside.

If these symptoms are present, throw out your pickle immediately as they can cause illness.

How long do homemade pickles last?

The best way to store homemade pickles is in an airtight container or jar.

They will stay fresh at room temperature for about two months, but if refrigerated they will last up to six months.

Do homemade pickles need to be refrigerated?

The question of whether or not homemade pickles need to be refrigerated is a hotly debated topic.

On one hand, you have people saying that they can last for months without going bad if left outside the fridge. Others say that the vinegar in the recipe should make them last for at least a couple of weeks before going bad.

There are also those who argue that storing them in the fridge will keep them fresher and safer from bacteria because it’s colder there.

The answer to this question may depend on how long you plan on keeping your pickles around as well as what type of spices you use when making them.

Generally speaking, homemade pickles will keep at room temperature for up to two months. However, if the environment is humid and warm then it may be necessary that they are stored in the refrigerator.

Does Branston pickle need to be refrigerated?

Branston Pickles are a type of pickle that can be found in many countries. The key ingredients are vinegar, sugar, salt, onions, garlic cloves and spices.

The great thing about this appetizer is that it doesn’t need to be refrigerated!

Do Vlasic pickles need to be refrigerated?

It depends on how the Vlasic pickles were packaged. If they come in a jar or can then no, they do not need to be refrigerated because there is very little moisture inside them.

But Vlasic pickles need to be refrigerated after opening. This is because they contain vinegar and other preservatives that will start to spoil if left out of the fridge.

Do dill pickles need to be refrigerated?

Dill pickles are a type of fermented cucumber that is typically stored at room temperature. It allows dill pickles to continue fermenting and gives a unique flavor.

But you need to refrigerate dill pickles after opening.

Do Claussen pickles need to be refrigerated?

Claussen pickles will stay fresh at home temperature. But you need to refrigerate them once opening.

Is pickle a fruit or a vegetable?

Although pickles are considered a vegetable, they are fruit.

So, do pickles need to be refrigerated? As long as you have an unopened jar of pasteurized pickles, you don’t need to refrigerate them.

To ensure your unrefrigerated pickles maintain their flavor and crunchy texture, you should store them in a dimly lit area that doesn’t exceed 50 degrees Fahrenheit. By doing so, you can expect your pickles to have a shelf life of one to two years.

Home > Info Guides > Do Pickles Have to be Refrigerated? What If Opened?
About Me