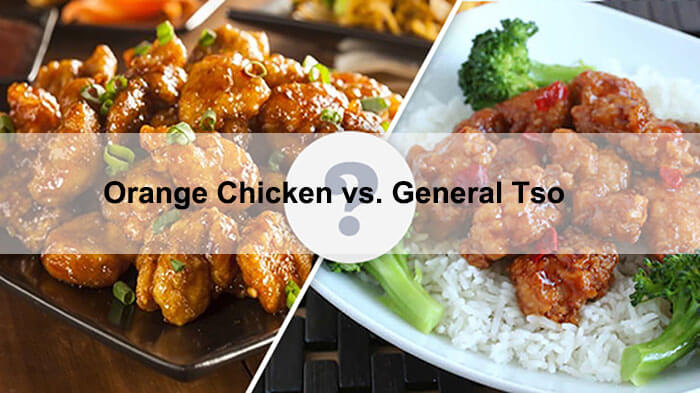 With the popularity of Americanized versions of dishes inspired by the classics of Chinese cuisine, the debate of orange chicken vs. General Tso can be a heated one.

Both of these delicious dishes have become cornerstones of American-Chinese food.

There are important differences between General Tso and orange chicken, particularly for people who have food preferences or allergies.

We will discuss these differences so you can discover your next favorite dish.

Orange Chicken vs. General Tso: What Are They?

What Is Orange Chicken?

Orange chicken can be described as small chunks of chicken breast that are breaded and fried to promote a juicy white chicken bite with a crispy, fried exterior.

The chicken is then tossed in a sweet and tangy orange-infused sauce. This sauce is often made to be quite spicy as well. 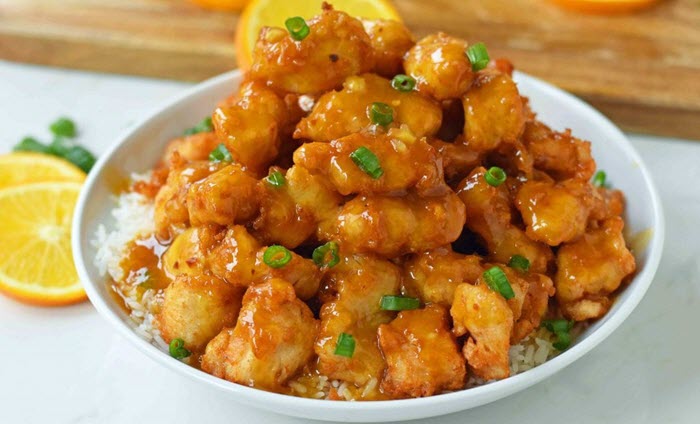 This American favorite is often served over a bed of white rice, fried brown rice, steamed vegetables, or a lo mein noodle. Orange chicken can be ordered at fast-food Chinese restaurants, dine-in Chinese restaurants in North America, or even at Chinese food buffets.

This means the orange chicken dish found throughout North America is not a traditional Chinese dish. Orange chicken, as Americans know it, would not be found at restaurants serving authentic Chinese food, both in China and internationally.

What Is General Tso Chicken?

General Tso is made in almost the same way as orange chicken, with only a few differences.

General Tso often begins with dark meat chicken, like legs and thighs, instead of the white meat chunks from chicken breast, like in orange chicken. 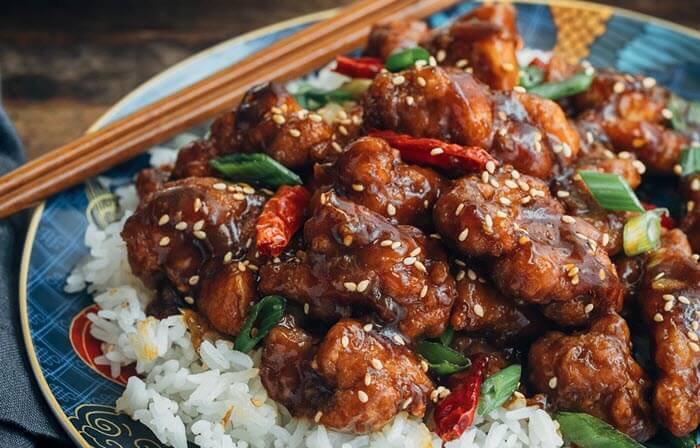 These chunks of dark chicken meat are broken down into bite-sized pieces, breaded, and deep-fried. And these chunks will result in the same moist center and crispy exterior so important to many of these Chinese-American favorites.

The sauce that is applied to General Tso chicken has a spicy, chile-based sauce that can really pack a kick. Those who are sensitive to spicy foods should tread lightly if they decide to explore General Tso.

What’s the Differences Between Orange Chicken and General Tso

General Tso has so many similarities to orange chicken, however, there are important distinctions to make that will make all the difference for diners.

Especially picky eaters or those with a spice sensitivity will need to know how these two popular dishes differ.

When comparing orange chicken vs. General Tso, the sauce is where the real distinction lies..

Soy sauce, rice vinegar, sugar, a tiny bit of sesame oil, dry sherry or Chinese rice wine, and a bit of optional chicken stock make up the base for both of these sauces.

General Tso’s sauce provides a depth of flavor with garlic, scallions and ginger. By adding red pepper flakes or dried, whole chiles, you can achieve different spice levels. Orange chicken, on the other hand, focuses on an orange flavor instead of chiles for its sauce.

An important difference with orange chicken vs. General Tso is that General Tso has roots in authentic Chinese cuisine.

In fact, General Tso was a member of the government in the Qing Dynasty and has no meaningful connection to this staple of American-Chinese cuisine.

Is There an Authentic Version of Orange Chicken and General Tso?

If you eat at an authentic Chinese restaurant in China or elsewhere around the world, you may spot dishes you recognize from your favorite North American Chinese favorites. Many dishes you find there are heavily inspired by authentic favorites.

There are also authentic versions of some of your other Chinese-American favorites. By learning their unique flavor profiles, you can replicate the taste of your favorites no matter what kind of restaurant you are in.

While the breaded and fried version of orange chicken will not appear in an authentic Chinese restaurant, you can still often order orange chicken. The authentic version ditches the syrupy sauce and deep-fried goodness, but the orange-infused sauce still delivers a tasty dish.

If you are looking for the similar flavors and experience of General Tso at a more authentic Chinese restaurant, look for a dish called Peking Duck. This succulent dish does not have any breaded or fried elements, but the tasty sauce and tender meat is a winner for every appetite.

Other Dishes Similar to Orange Chicken and General Tso

If you are looking for more Chinese-American favorites to add to your list the next time you visit a restaurant, there are other similar dishes to orange chicken and General Tso.

Delicious fried comfort foods tossed in a decadent sauce is a notable characteristic of American food, after all! 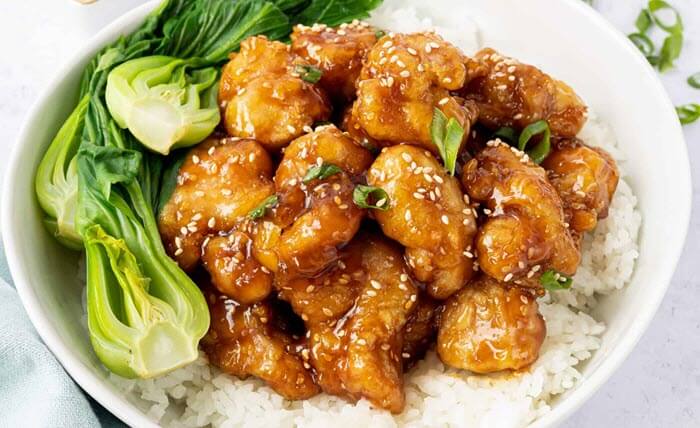 Sesame chicken is very similar to orange chicken and has a mild flavor as well.

This sweet sauce-covered chicken is liberally covered in nutty sesame seeds to offer a unique taste.

This dish is also usually served over white rice, fried brown rice, or lo mein noodles for a complete meal.

You may like: Sesame Chicken vs General Tso’s Chicken: Which is Better?

Both orange chicken and General Tso are unique creations of Chinese-American cuisine.

While you will not find these dishes at an authentic Chinese restaurant, you can always enjoy them at your favorite Chinese buffet or Chinese fast-food place in North America.

Orange chicken is a great option for deep-fried chicken chunks in an irresistibly sweet and tangy sauce. General Tso is another dish featuring breaded and fried chicken, but this meal is characterized by a distinctly spicy sauce filled with the wonderful flavors of chiles.