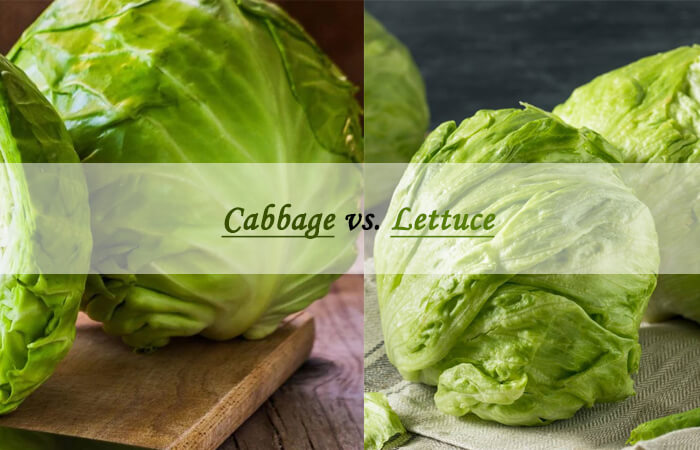 The difference between cabbage and lettuce might not be apparent, but they have different nutrient profiles, flavors, and uses.

Lettuce is a lighter, leafy vegetable containing fewer calories, fiber, and vitamins than cabbage. It is often served in raw dishes like salads but can be part of some soups.

Cabbage has nearly double the calories, triple the fiber, and a higher amount of vitamins than lettuce. It is popular in cooked meals.

Cabbage is a leafy green, red, or white biennial plant with a head made of dense, edible leaves. Usually weighing between 1 to 2 pounds, cabbage is part of the brassicas classification of leafy greens.

The leaves of cabbage heads are firm with a thick stem. The hard consistency leads most people to chop or cut cabbage into thin strips or small pieces.

It can be eaten raw and is popular in coleslaw dishes when combined with mayonnaise or vinegar-based sauces. It is also widely used in pickled form, including sauerkraut and kimchi [1]. 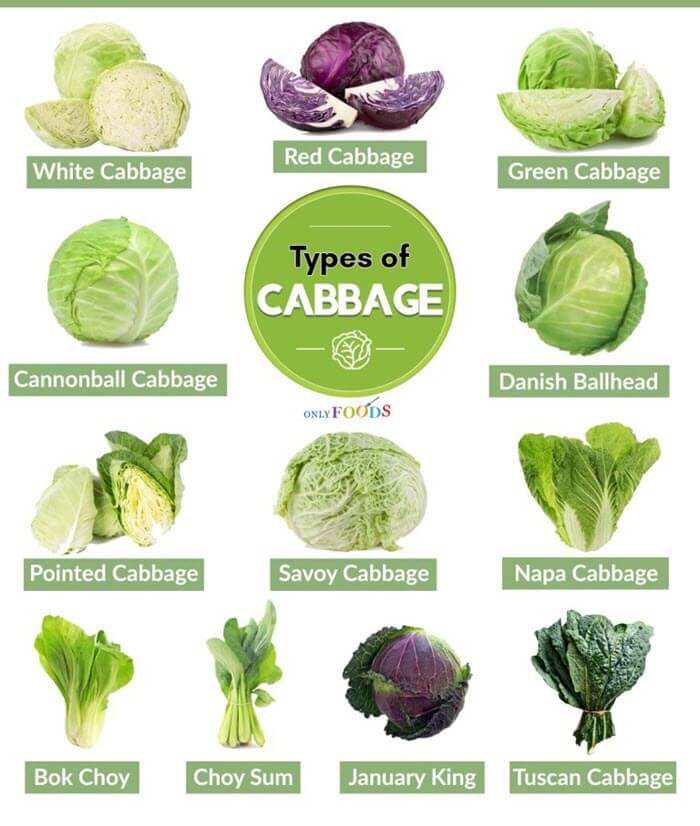 Cabbages sold at markets are smaller varieties, while ones used for processing are larger and have a lower water percentage. In either case, cabbage is a low-calorie food with high fiber content.

Cultivators harvest cabbage during the first year of its biennial cycle [2] when the densely-leaved heads form.

They do well in full sunlight in soil that can drain well and has a pH of between 6.0 and 6.8. It does best in temperatures between 39 and 75 degrees Fahrenheit.

Lettuce is a popular leafy vegetable with a typical height of 6 to 12 inches and is part of the Lactuca or Asteraceae family of vegetables.

Lettuce can be a variety of colors, most often on the green and red spectrums with rare yellow, gold, and even blue-teal colored leaves.

It is most often used in salads but also added to an assortment of other foods like sandwiches and wraps, plus cooked meals including soups and stews.

Lettuce can have dense heads, as found in iceberg lettuce or more fluffy varieties like Romaine.

Lettuce is an annual plant best grown in a warmer environment with sandy soil between 6.0 and 6.8 pH. After plating lettuce, it is generally ready for harvesting around 65 to 130 days later. 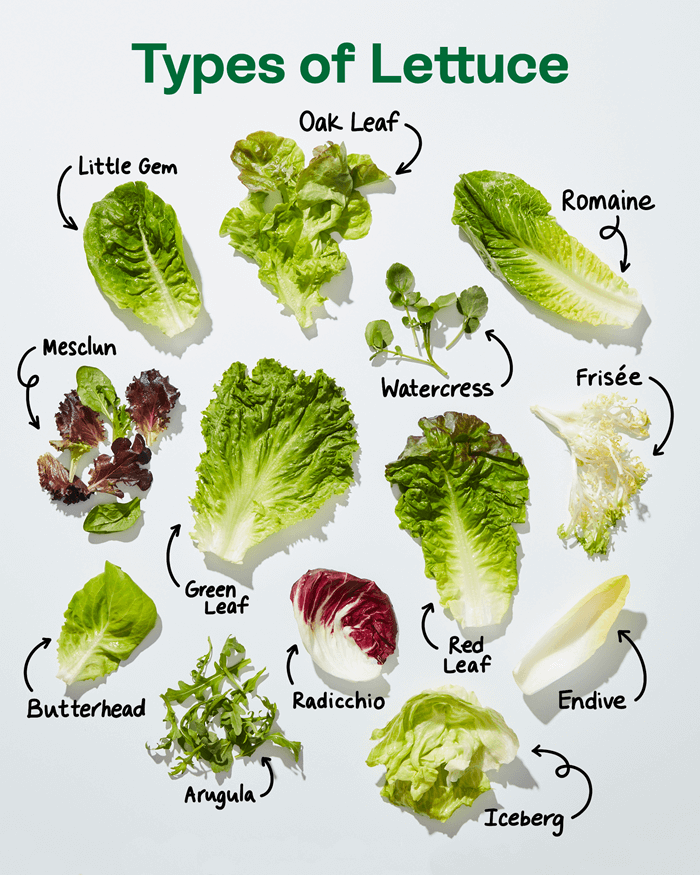 Loose-leaf lettuce is the most widely planted variety and is common in salads. Romaine lettuce forms long upright structures and is popular in sandwiches and salads.

Iceberg lettuce is the most prevalent in the United States but also the most heat sensitive and the lowest in nutritional content.

Some lettuce varieties have a sweeter flavor, like the round butterhead type. Other lettuce types include celtuce and oilseed, which are grown for their seed stalk or seed oil rather than the leaves.

Due to lettuce’s ability to serve as a food supply for many insects, it can be difficult to grow.

Many worms, beetles, and caterpillars can attack lettuce crops, in addition to the threat from other mammals such as rabbits and groundhogs.

Here are the differences between cabbage and lettuce.

The appearance of cabbage and lettuce might fool some into thinking they are interchangeable in their culinary uses.

Cabbage is usually round in shape, with circular-shaped leaves which pack tightly on top of one another. The exterior leaves are tougher than the interior ones, which can be delicate.

On the other hand, lettuce comes in a large array of shapes and sizes.

Both can incorporate a spectrum of green, red, or even purple colors, with some red or purple cabbage being the most vibrant. Most types of lettuce are green in color.

A difference between cabbage and lettuce is that they have different flavors.

Cabbage is a tougher vegetable that is more capable of being used as a cooked product, whereas lettuce is lighter with higher water content which people prefer to serve raw.

Cabbage’s flavor is more complex and slightly peppery, while lettuce has a light flavor easily complimented with a variety of other vegetables, oils, or vinegar.

Due to cabbage’s more pronounced flavor profile and harder consistency, it is popular in cooked or pickled dishes where it becomes softer and takes on other flavors.

Latter do well as raw food, chopped and added to other vegetables, cheeses, meats, and salad dressings. Its flavor profile is usually light and easily overcome by a sauce.

Lettuce and cabbage are similar in nutritional makeup. Both have a low level of total calories with high fiber and a host of crucial vitamins, minerals, and antioxidants.

When discussing cabbage vs lettuce, it’s important to note that they are sources of minerals, including magnesium, phosphorus, and iron.

Iceberg lettuce is one of the lettuce varieties with the lowest amount of nutritional value, and red and green leaf lettuce can be similar to cabbage.

FAQs About Cabbage vs. Lettuce

Can I use cabbage instead of lettuce?

Cabbage can be used instead of lettuce, but it will give a stronger texture to the dish. It also adds a more pronounced flavor.

Usually, cabbage is used for cooked meals, while lettuce is in raw dishes.

Cabbage or lettuce, which is better?

Both cabbage and lettuce have their uses.

Cabbage is higher in calories, fiber, and nutrients, but is tougher and has a stronger flavor. Lettuce does best served raw and has a lighter flavor.

Home > Comparison > What’s the Difference Between Cabbage and Lettuce?
About Me