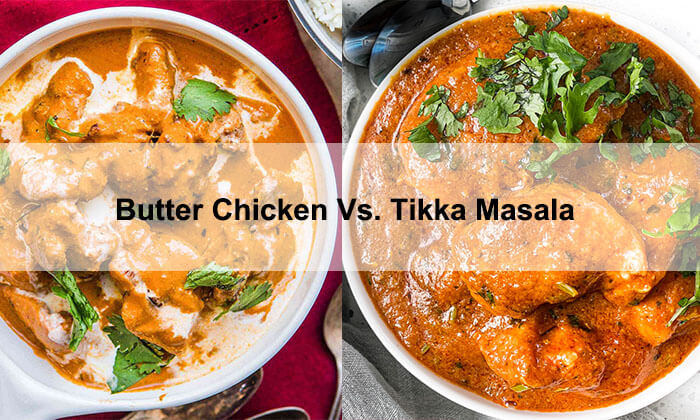 Chicken Tikka Masala and Butter Chicken are two of the world’s most popular dishes. Both are flavorful dishes that consist of chunks of tender chicken and a rich, creamy sauce.

However, although these recipes have some similarities, they also have some pretty significant differences.

This guide discusses the similarities and differences between Tikka Masala vs Butter Chicken. Once you’re finished reading, you’ll be able to thoroughly understand and appreciate these two popular dishes.

What Is Tikka Masala?

Tikka Masala often appears on restaurant menus or recipes with the name Chicken Tikka Masala. In some cases, you might see it referred to as Murg Tikka Masala. There are varied origin stories for this stew. According to various sources, it may have originated in India, the UK, or even Scotland.

Chicken Tikka Masala has strong similarities to many Indian curries, which is why most people believe its roots lie in Indian cuisine. The spices, creamy sauce, and chunks of chicken are all ingredients you can find in various curry recipes.

The essential ingredients in Tikka Masala are tandoori chicken, a gravy made from onions, tomatoes, and cream, and spices. Since the recipe has no known origin, there’s no traditional recipe to speak of. For this reason, variations of this dish are pretty common.

What Is Butter Chicken?

Butter chicken originated at Moti Mahal [1], a restaurant in Delhi, in 1947. It grew in popularity over the decades to become one of the most popular Indian dishes in the world.

The essential ingredients of a good Butter Chicken recipe are chicken, a tomato and onion cream sauce, paste made from cashews or almonds, and garam masala powder [2]. You can serve this curry with flatbread, such as naan, or rice.

The benefit here is that you can easily create both of these recipes without buying a lot of additional ingredients. You can serve them each with similar accompaniments, including rice, flatbread, or a salad.

Chicken is the best choice for these dishes because it compliments the flavor of the gravy perfectly. Although you can use other meats or vegetables, chicken truly works best.

If you need a vegetarian option, choose paneer, an Indian cheese, or tofu. 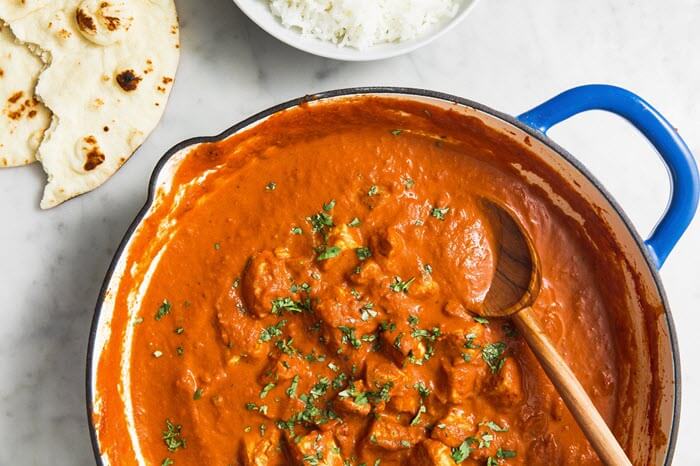 The gravy for both recipes is a mix of cream, onions, tomatoes, and spices.

t’s essential that your dish’s sauce is smooth, so you’ll need to combine the ingredients and spices together in a food processor until you have a fine puree.

Both of these dishes have similar cooking methods. In most cases, the chicken is prepared separately and added to the gravy once cooked. However, some chefs will cook the chicken in the sauce.

Both dishes can be served with similar side dishes. Flatbread, such as naan or roti, make great choices for dipping into the gravy.

Other options for accompaniments include mango pickles, raw onions, rice, or a nice salad.

Although Tikka Masala and Butter Chicken are quite similar, they have several key differences. These dishes differ in the following areas:

One of the most apparent differences between Tikka Masala and Butter Chicken is the color. Tikka masala has a distinct fiery red color, while Butter Chicken has an orange hue. 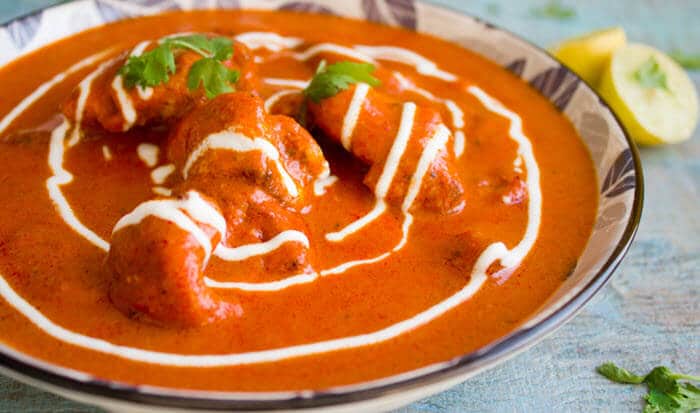 Both of these dishes are a type of curry, which means the best way to distinguish between them is by their flavor. Butter chicken uses various milk-based products that cut back on the spiciness.

On the other hand, Tikka Masala’s fiery red color speaks to just how spicy the dish can be.

Butter chicken tends to be sweeter than Tikka Masala. Most recipes will call for a pinch of sugar or a dash of honey.

However, Tikka Masala should have no sweetness at all. It should be flavorful and spicy.

Both of these recipes require boneless chicken. However, Butter Chicken is usually prepared using breast meat, whereas Tikka Masala can use any part of the chicken.

In addition, how you prepare the chicken can vary. In Butter Chicken, the chicken is usually shredded. Chicken Tikka Masala is prepared using the tandoor and is cut into nugget-sized pieces.

If you still have questions about these two dishes, keep reading.

Is Chicken Tikka Masala the Same as Butter Chicken?

Chicken Tikka Masala and Butter Chicken are very similar, but they also have distinct differences.

What is Garam Masala?

Garam masala is a spice mixture that is very common in Indian recipes and provides a very distinct flavor to dishes.

Can You Use Vegetables Instead of Meat in Tikka Masala or Butter Chicken?

Meat is the best choice for these curries, although paneer or tofu would work well, too. However, vegetables would alter the flavor quite a bit and won’t hold up as well as a sturdier protein.

What Type of Bread Goes Best With These Dishes?

Traditional Indian flatbreads, such as naan, roti, or kulcha, are great accompaniments because they give you the perfect tool to sop up any leftover gravy.

Hopefully, you’ve enjoyed learning a bit about the similarity and difference between Butter Chicken and Chicken Tikka Masala. These decadent dishes are staples in the Indian subcontinent and abroad, which makes them incredibly versatile.

When trying out these recipes, make sure you choose the right accompaniments, and always prepare to have some leftovers!